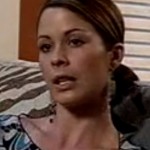 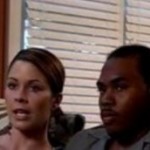 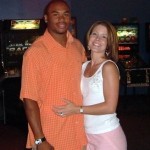 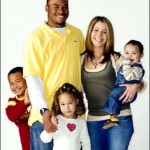 As Carolina Panthers wideout Steve Smith engages in yet another battle on the field tonight (this time being Aqib Talib), we decided to find out more about Steve Smith’s wife Angie Smith.

Steve and Angie Smith met through mutual friends while attending the University of Utah together. Steve told Angie that he wanted, “to get to know you and pick your brain,” which was a unique pick up line that actually worked. The couple had planned to marry during February of their senior year, but wound up pushing up the date and marrying during a bye week of Steve’s 2000 senior season. The couple planned the entire nuptials in a week, and are every bit as married as those 2 year, $50,000 events (as I desperately tried and failed to remind my wife leading up to our wedding). The couple has three children together, Peyton, Baylee and Boston.

If you’re anything like us, you may seem to remember Steve Smith’s wife being brought up earlier this season. Surely enough it did, and it ties in nicely to the lead of this post, when it came up during a fight with an opposing player. Smith took exception to St Louis Rams corner Janoris Jenkins, and the two sparred on the field, and afterwards through the press. Smith went on record saying:

What I don’t like is a young guy who comes in, who obviously his first time ever using the internet and Google, and he Googles information about me, talks about my wife and stuff like that. That’s just some of the bulls*&t I just don’t play with…. When I don’t know a guy and he’s talking about how’s Angie doing, those things. C’mon… And if I seem him on the street, I’m going to bust him in the f&*king mouth.”

Um. I think he means it. No one vote low on Angie Smith please…. PLEASE!!! 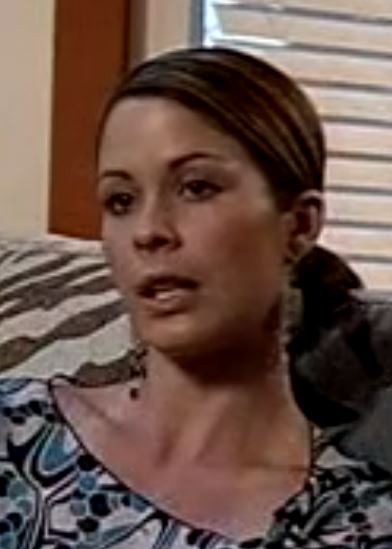