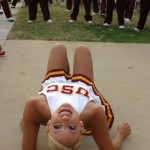 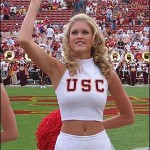 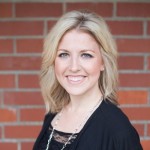 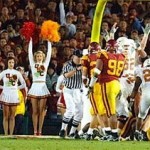 Ryan Kalil’s wife Natalie Kalil was once Natalie Nelson, an internet meme sensation. I’m talking about something almost no one remembers, including myself. Apparently back in 2006 while Natalie was a USC Song Bird (cheerleader), USC was playing Texas for the BCS National Championship, and Natalie exploded with an enthusiastic cheer for the wrong team after Texas made a big play, and the image was captured and photoshopped into all kinds of goofy memes. So basically Natalie Nelson was known as a super cheerleading airhead for awhile. In the picture, you can see two of the other cheerleaders looking over at Natalie like, “Uhh, no that’s the wrong team, honey.”

These days, Ryan Kalil’s wife Natalie Kalil is simply known as “mommy,” as she has birthed two kids so far. One of them is a young girl named Kenadi, and another is her younger brother Chandler. Natalie married Ryan in March of 2008, shortly after her cheering career came to an end, but it does live on unofficially whenever she watches the big guy do his thing for the Panthers. I want to add a few notable asides here about Ryan himself: 1) he worked on a football training spoof with Will Ferrell and 2) one of his hobbies includes clay-mation. Yes, you heard that correctly– animating clay frame by painstaking frame. I think that is totally awesome. Ryan Kalil, professional football battering ram by day, clay animator by night. I wonder if he’s ever clay-mated Natalie cheering for the wrong team? God, he really, really should do that at some point and then debut it at a party.

As you might have guessed, Natalie’s days are packed with taking care of the kids and running errands to maintain the lovely household that the family keeps. These things take energy, dedication, and the wherewithal to realize who you are helping. 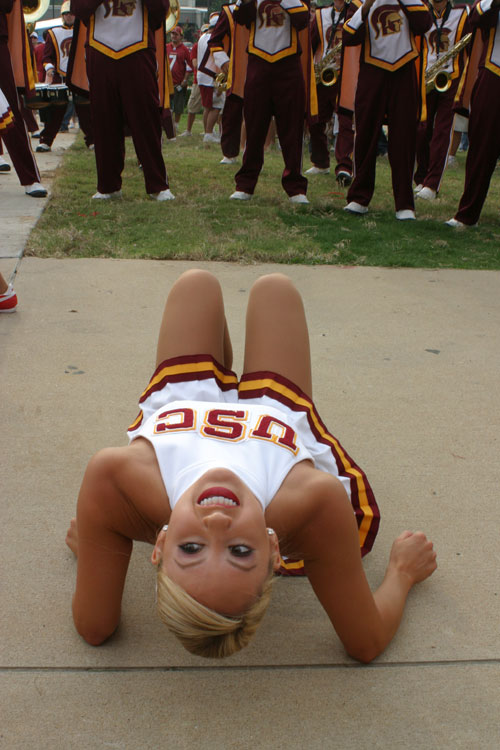