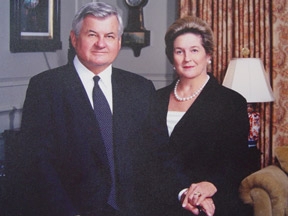 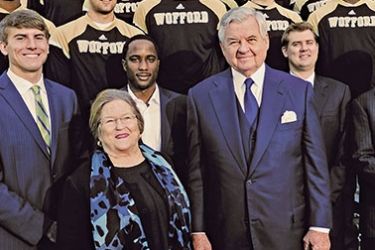 Jerry got his start in Spartanburg, S.C. with the Hardee’s chain and Spartan Foods. Richardson owned Flagstar Corporation, which owned both brands. He retired in 1995 and bought the Carolina Panthers franchise. In those 20 years, the NFL has grown at an enormous rate – along with the Richardson’s fortune.

So back Winthrop University. Jerry Richardson and wife Rosalind Sallenger Richardson established a $500,000 fully endowed scholarship to Winthrop. The scholarship was meant to honor his wife and her commitment to the arts.

The Richardsons are both lifelong residents of North Carolina. They have three children. Aside from son Jon (who died in 2013), they also have a son Mark and a daughter Ashley. They also have nine grandchildren and one great grandchild.

Their son Jon Richardson was the Former Panthers stadium president. In 2013, he died after a lengthy battle with cancer at the age of 53.

With the Carolina Panthers about to make the Super Bowl, we figured it was high time to cover Jerry Richardson and his wife Rosalind Sallenger Richardson. The Panthers are set to play the Denver Broncos, after the New England Patriots played a stinker of a game. While the Bronco’s defense has had a hell of a season, the same can be said about the Panthers defense. And when you compare and contrast the play of Cam Newton versus Peyton Manning – there’s an obvious advantage for the Panthers. In a battle of two great defenses, the team with the better offense, and specifically quarterback, tends to win. We can’t help but think the Panthers will crush them. We’ll see – but that’s where I would put my money. 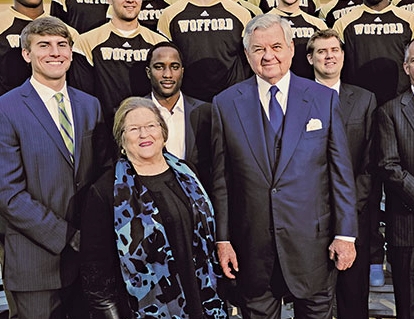