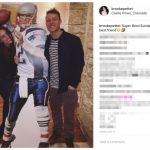 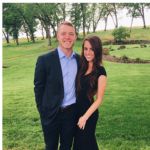 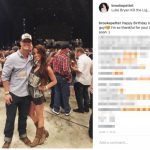 Chrisitian McCaffrey has become one of the top running backs in the NFL.  And with that status comes the burning questions around the woman who gets the label of Christian McCaffrey’s girlfriend.  Coming out of college he dated a woman, though things fell apart.  But, much like defenders in the league, life seems to have a hard time bringing him down.  Why?  Well, lets meet

Yeah, I’d say picking yourself up with a  Miss Universe contestant is one way to get past a breakup.

That’s right folks, Mr McCaffrey seems to be settling down in a big way with the 2012 Miss Universe contestant.  And these two most certainly seem into each other.  Let’s scroll through their Instagram, shall we?

An extra spicy deluxe feeding me a sandwich 🥵

A post shared by Christian McCaffrey (@christianmccaffrey) on Feb 8, 2020 at 2:56pm PST

Never a dull moment with you. Happy Valentine’s Day ❤️

Christian McCaffrey’s girlfriend Brooke Pettet attended the Walter Cronkite School of Journalism from 2013 to 2017. The school is also part of Arizona State University. However, she doesn’t seem to identify herself exclusively as a journalist yet. She talked about her strong organizational skills on her professional social media account. Brooke also landed a job at a gym as a personal trainer. I see many player wives and girlfriends become personal trainers. They take good care of themselves and possess fitness knowledge. It makes sense.

Though no ones yet heard how they met, I have a strong theory. Since Christian McCaffrey’s girlfriend shares pictures but he doesn’t, he does give one clue. Back in March, he thanked the gym she works for after they prepped him for the NFL Combine. Brooke may have recruited him into the gym. It’s also entirely possible Christian asked them if they would employ her since she started in July. Anyway, that’s the only mention of their relationship on his personal social media account. Brooke, on the other hand, shared a lot of photos on her own account. She loves to ride horses and grew up with them. She rides equestrian.

The oldest picture I saw of the couple comes from February of 2016. Terez Owens showed a bunch of social media photos of the couple. Christian McCaffrey’s girlfriend attended the Stanford game at the Rose Bowl in 2016. They also won the game, and she commented how happy it made her. My best guess is they knew each other since high school since they both grew up in Colorado. Brooke herself comes from the Denver area. I don’t think they attended the same high school but Highlands Ranch (where Christian went to high school) is about 20 miles from Denver. They also spent New Year in Castle Rock, Colorado together. Their life could just be getting started!