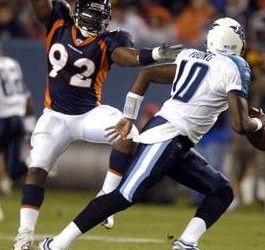 Elvis Dumervil is one half of the dynamic defensive duo that opposing QBs fear when playing Denver. He’s been consistently blowing past blockers and wrecking havoc on offensive gameplans since 2007. But he’s also had some trouble with the law during his 6 year career. Hopefully Elvis Dumervil’s girlfriend Stephanie can help him keep focus on the field and stay out of trouble.

Dumervil was born and raised in Miami. His parents were Haitian immigrants, so naturally they put down roots in the Little Haiti area. This area is not exactly known for being upscale, so we think it’s safe to say he had his fair share of adversity to get through growing up. Dumervil could be considered an inspiration to many kids out there, but his upbringing seems to have gotten him in trouble with the law a few times. In 2010, he allegedly assaulted a guard at the Broncos stadium after being denied entrance when Dumervil didn’t have his ID badge. He again allegedly assaulted someone and flashed a gun in the summer of 2012 during a road rage incident. With so much talent, Denver fans must really hope he puts these incidents behind him and maintains his composure going forward.

Elvis Dumervil’s girlfriend Stephanie has been on the picture since 2007. While maybe just a coincidence, this is when he turned talent into success. It seems for the most part they have kept things low key, but as more information becomes available we’ll let you know. 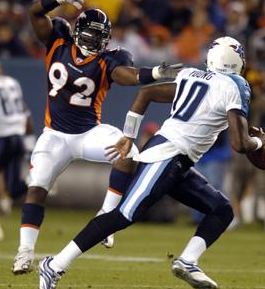