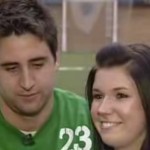 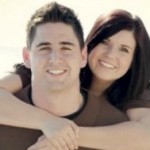 Anytime I turn on a BYU game I’m amazed by the number of players that are married on the team, and Dennis Pitta’s wife Mataya Gissel is yet another example of this.

Yes I know some of the players are older do to the religious retreat they go on and that Mormon’s tend to get married younger but man seems like a waste of going to college. This is by no means a knock on Mormons so please don’t go there,…. but really I went to school for two reasons, to get drunk and meet girls (which could explain why I write for this site now).

Baltimore Raven’s TE Dennis Pitta is no different from any BYU student, marrying Mataya Gissel on July 19, 2008 when Dennis was going into his junior year at school. For those that remember BYU during those years it was the Max Hall to Dennis Pitta show on offense. Wonder why those two had such a good connection on the field? Well could be because they are brother-in-laws. Max married Mataya’s sister McKinzi a few years before Dennis and Mataya got hitched. Dennis and Mataya were, of course, set up by McKinzi. If Dennis and Mataya ever have kids and the ask their parents where they went on their first date here is the answer they will give. The went to a party and watch the season premier of The Office. Somehow that doesn’t surprise me in the least.