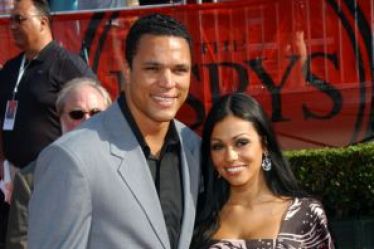 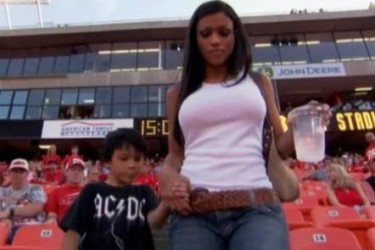 Tony Gonzalez and wife October Gonzalez recently posed for a PETA campaign discouraging wearing fur. Though Tony is not a typical PETA vegan, he did experiment with veganism as an alternative therapy after a bout of facial paralysis caused by Bell’s Palsy. He has also credited going vegan to making him more focused, with a higher energy level. Given how long his career has lasted, and the fact that he has only missed ONE game that entire time, it’s hard to argue with him.

Tony Gonzalez met future wife October when she was working at a bar owned by Dennis Rodman in Newport Beach. Though October had a boyfriend at the time, Tony kept tabs on her and, a year later when she was single, he eventually asked her out. There are rumors that the two are not officially married, but took part in a commitment ceremony July 20, 2007 which was overseen by Tony’s teammate Tony Richardson. The two say that despite the legal technicality, they consider themselves married.

Tony Gonzalez and wife October have one daughter, Malia, and one son, River, together. Tony also has a son from a previous relationship, Nikko. Despite splitting their time between Atlanta and California, Tony and October keep the romance alive by insisting on a date night every week. Aside from PETA, the couple is also charitably involved with the Boys and Girls Club, which Tony grew up attending.

After his playing days are over, Tony and his wife and their children plan to split their time between California and Europe. 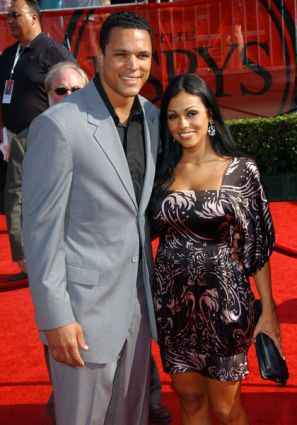