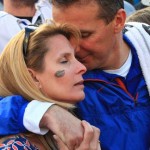 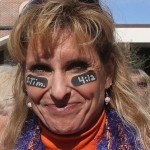 11-23-2011: Despite denying the rumors himself today, Urban Meyer is strongly considered to be taking the vacant Ohio State coaching position.

Urban Meyer’s wife Shelley Meyer was born and raised in on a small farm in Frankfort, Ohio. Raised as Shelley Mather, her father worked on the B&O Railroad, like his father before him. Shelley eventually enrolled at the University of Cincinnati as a nursing student where she met Urban Meyer, who was a sophmore attending the school playing football. Before earning her degree in psychiatric nursing, Shelley was introduced to Urban at a fraternity/sorority Kentucky Derby party in May 1984. Though Shelley had a boyfriend back home, Urban quickly wore her down and they began dating. Five years later in July of 1989, the couple was married – about a year after Shelley demanded a ring in order to agree to move cross country with Urban for a coaching gig at Illinois.

Making full use of her degree in psychiatric nursing, Shelley Meyer is the unofficial “mom” of her husband’s football team. She considers herself a surrogate mother to all of the player’s on the football team, providing “anything that needs a woman’s touch”. Judging by my mother, that means she’s bugging these kids about doing laundry, going to class and coming home too late. Sounds like just the thing I’d want, finally being away from home for the first time…

Urban and Shelley Meyer have three children, Nicole, Gisela and Nathan or “Nicki”, “Gigi” and “Nate” as they called around the house. Both of their daughters currently play Division I volleyball, one for Georgia Tech and the other for Florida Gulf Coast.