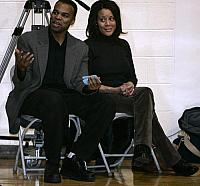 Harvard men’s basketball coach Tommy Amaker is making Harvard fans across the country. As a member of the faculty at Harvard Medical, Tommy Amaker’s wife Stephanie Pinder-Amaker has been a Crimson fan all along.

After a bracket busting upset over 5th seeded Cincinatti, Tommy Amaker is sure to see his name thrown around in coaching rumors after the season. However, after Miami tried to lure the Amaker family away from Cambridge, Mass, it’s sure to be an uphill challenge. That’s not to say the Amaker’s haven’t been through it all before. When Tommy Amaker was the head coach at Michigan, Stephanie served as associate dean of students. The entire family up and left when Harvard came calling.

The couple first met while Amaker was still at Duke, and she’s made the trek with him everywhere he’s gone. Stephanie obtained a BS at Duke in 1982, and a Postdoctoral Fellow in Behavioral Medicine from the school in 1989. Tommy graduated Duke in 1987 before immediately joining Coach K’s staff until 1997. According to Dr. Pinder-Amaker’s profile on the McLean Hospital website:

Stephanie currently serves as Director of McLean Hospital’s College Mental Health Program (CMHP) where she is developing efforts designed to improve the hospital’s work with college students, their families and educational institutions through treatment, education, consultation and research.

Tommy and the Crimson gear up for second round action this weekend. Many around the country will be cheering for the smart kids to hit the Sweet 16.