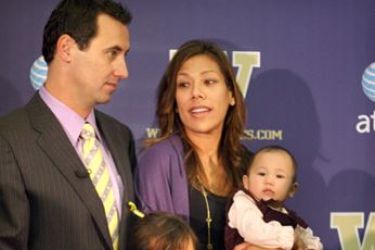 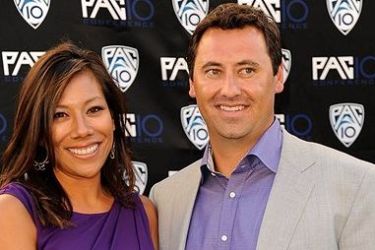 The University of Southern California made a bit of a surprise hire when they tabbed former Washington head coach Steve Sarkisian to take over as head coach of the Trojans football squad. Immediately, USC faithful and pundits alike began to buzz that Sarkisian was not the right choice for the program, despite having previously worked as an offensive coach at the school under Pete Caroll.

Fortunately for Coach Sark, his wife has been through the roller coasters provided by a football life. The couple has been together since college, and were married after graduating in 1997. The couple took vows on your average summer weekend,… except that Steve was headed off to Saskatchewan that week for his brief stint as a quarterback in the CFL. Stephanie joked to the Seattle Times that Steve’s rookie season was nothing more than a lovely five month honeymoon in Regina, Canada.

The family had been along for the ride. The 39 year old Steve and his wife Stephanie have three children: two daughters Ashley and Taylor and a son, Brady. As a quarterbacks coach from southern California, I wonder who the inspiration for his son’s name was….

Unfortunately, Steve Sarkisian’s wife will not be immediately with him in the coming months after school officials put him on leave, advising him to get some much needed help. Stephanie filed for divorce early in 2015, and the couple has parted ways. Sarkisian has been a accused of being drunk at school events, practices, and even a recent game in prime time. While no official word on the reason for his departure, it’s clearly a difficult time for all parties involved. Whether the problems at home have manifested in the locker room remains to be seen. 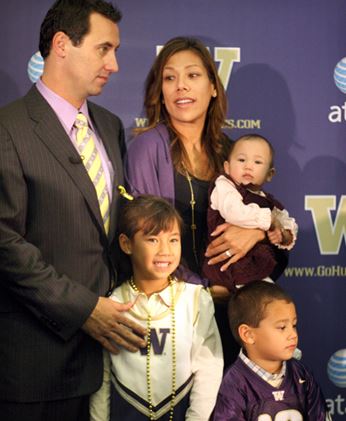