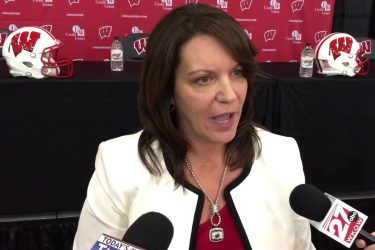 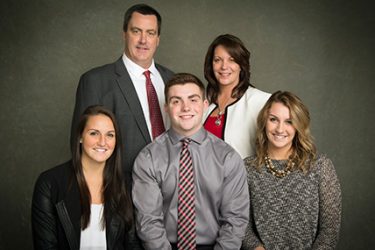 Paul Chryst’s wife Robin Chryst is the mother of their three children, Katy, JoJo, and Danny. Robin has no problem addressing the media and appeared very comfortable in interviews following his hiring at Wisconsin in 2014. She stood there with a bunch of microphones in front of her face, and she answered all the questions about transition like a champ. When they moved from Pitt to Wisconsin, she said the players were like her kids. She described the move as “emotional.” Both their daughters stayed at Pitt. Robin explained that Danny applied to Wisconsin because it was probably the most convenient thing.

Robin actually attended Wisconsin, and the interviewers told her to “put that badgers sweatshirt back on.” She agreed. Paul Chryst’s wife is easy to talk to. Their son Danny mistook the badger for a rat when he was a kid. Robin was not happy about that mistake. Most of the Chryst extended family is located in Wisconsin so everything works out well. The couple started dating in high school and have been together ever since. They moved a lot when the coach career started. Paul coached for something like thirteen different organizations in 26 years. It is not ideal to move setups so often, but they managed.

The couple always really wanted to live and work in Wisconsin. A good portion of Paul’s career revolved around Wisconsin. They moved to and from the state a few times. The stint at Pitt lasted only two years. They found their ideal spot. It’s a safe bet Paul Chryst’s wife wants him to stay head coach of Wisconsin and not change ever again. She probably wouldn’t put it that way, but it seems obvious all the pieces are in place. True, the child-rearing part is over so that gives them more flexibility, but they both want to be in Wisconsin, and that is where they are.