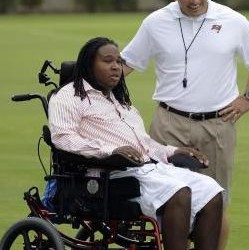 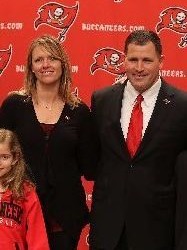 Greg Schiano’s wife Christy Schiano is the mother of their four children. Their names are Joe, Matt, Katie, and John. Two of the sons play football for schools. Since Greg played football for Bucknell, it follows that their son Joe followed in his footsteps. Joe started his freshman season at Bucknell in 2014. Both he and his brother Matt attended Berkeley Preparatory School before college.

The University of Tennessee courted Greg Schiano to become their head coach. Now Greg Schiano’s wife doesn’t have to consider moving to that state. Before both parties reached an agreement, a large backlash spread and the school pulled out of the deal. According to The Guardian, the reason was Schiano’s link to former Penn State coach Jerry Sandusky. Schiano served as assistant coach under Sandusky for a time. Two state representatives, Jeremy Faison and Eddie Smith, weighed in on the matter. Faison said the state doesn’t need the highest paid state employee (the school head coach) to have that type of potential reproach. Smith said something similar and said he sincerely hoped the rumors of Schiano’s knowledge of the incidents weren’t true.

The state reps’ doubts came because of their knowledge of a deposition from coach Mike McQueary. McQueary said Schiano told another assistant coach named Tom Bradley that he saw Sandusky doing something to a boy in the shower. Schiano denied ever having any knowledge. He also tweeted in 2016 he never saw any abuse or had any reason to suspect it. The Washington Post said on November 26th his involvement with Penn State cost him the job. That was their direct headline. Back in November of 2014, Sports Illustrated mentioned Greg Schiano’s wife and kids in a short article about him not working as a coach. The article mentioned his first job in the morning is to prepare breakfast for his wife and all four of his kids.

Since that article came out in 2014, two of those kids have now left the household. The youngest, Katie, is still only about thirteen years old as of November of 2017. Greg Schiano’s wife is mentioned later in the SI article because they attended one of their son Joe’s games. Christy attends every game she possibly can when her sons play at Berkeley Prep. According to a NJ.com news post, Greg and Christy donated $250,000 to the Rutgers Future Scholars Program in 2011. The fund is aimed at empowering people from the local college community the chance to attend the school. 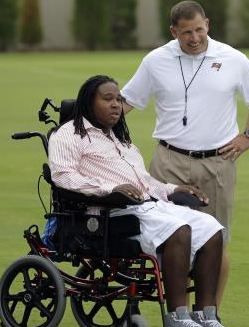