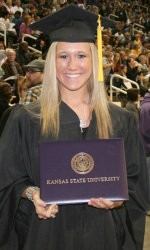 In the early days of this site, we were kind of dicks. There was an infamous post with the title of “Lions and Tigers and Player X’s wife… Oh My!” After getting yelled at a few times, and maybe just maybe growing up a little bit, we’ve toned down and have really taken almost all judgement out of our posts. However, there are times when news stories come along that are so unbelievable that we feel the pressure to comment (and yes, you jerks, we know you don’t care what we have to say). In an effort to compromise we’ll break this post up into two parts,… NEWS and COMMENTARY. OK, got it? Here goes

NEWS
Kansas State QB Collin Klein has inserted himself to the top of any Heisman discussion with his on field heroics this season. He is a man of great dedication, and perseverence to accomplish what he has both on and off the field. It should come as no surprise that Collin Klein’s wife Shalin Spani is an athlete in her own right who can understand his commitment and dedication involved with promises made to oneself (Spani is a basketball player at K State and daughter of Kansas State football legend Gary Spani). Speaking of promises to oneself, their romance takes an interesting turn when you find out that many of the steps of their relationship were predicated by a promise Klein made to himself when he was 14 years old,… that he would not kiss a woman until they were on the altar being married.

Klein apparently held true to his promise, but took the out of order steps to the relationship to a whole new level when we learn that Klein and Spani did not go on their first formal date until after they became engaged. In an article on CBSSports.com, Spani does admit that their courtship was, “unusual,” but does not elaborate beyond that.
Speaking of Spani, she follows internal promises herself, as she admits in that same article that “a voice in my head” told her she was going to marry Klein before the proposal ever came.

In an interview with Jim Rome, Klein did elaborate on the subject a little more saying,

“It was really a God thing from top-to-bottom. He had really put it on both of our hearts. … [it’s]actually something that we both kind of held to and wanted to maintain a level of purity for that special day,”

COMMENTARY
WHAT? I mean seriously. What? How the hell does this possibly work? I’m in no way judging any religious persecutions or devotions or traditions or whatever the hell this is called, but what? How can you possibly ask someone to marry you without sitting across from a dinner table on a date? What if they annoy you when they chew? What if they make weird noises when they eat? What if they order a really embarrassing drink, or they’re mean to the waiter? I lived with my now wife for five years before we got married, and I’m still not sure it was the right call (Of course it was wife, but this is only supporting my rant,… I swear). Seriously, she came after me with two clenched fists ready to swing because I didn’t hang up a towel. How do you know that Shalin won’t do this to you Collin? Or how do you know that she won’t be the one leaving wet towels on the floor?
Also, this whole kissing thing,… dude what if she was awful? What if she got crazy with the tongue. I dare you to try to correct your wife on kissing. Those clenched fists will make another appearance.
Dude, it’s admirable what you did, and I’m sure God is proud of you for keeping things pure…. it sounds like a sorta cool utopian self deprivation. My form of self deprivation is seeing if I can go 20 minutes without checking email or Twitter. I’m rarely successful, but when I am, I feel awesome for it. You should try that. Remember, you’ll probably be the #1 or 2 pick to save the Chiefs in April, and with that comes tens of millions of guaranteed money,… dude you now owe her HALF. Considering you hadn’t been on a date, I doubt the pre-nup conversation came up.

OK, so seriously, best of luck to the two. I wish no harm on anyone, and hope it works, but I don’t see it. If it does last, and when your NFL career is over, Klein should give marriage seminars, cause this dude will clearly have it figured out. 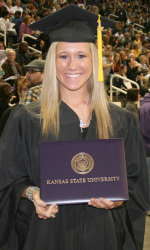