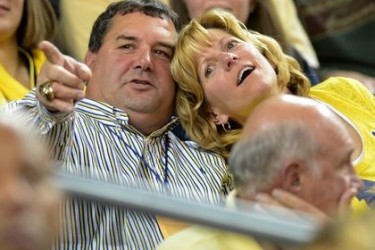 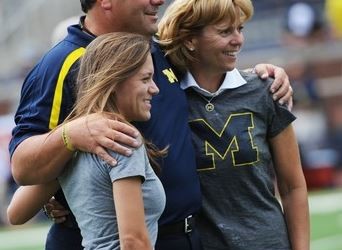 Okay, so Brady Hoke got booted from Michigan. Players and fans still like the guy, and Brady Hoke’s wife Laura Hoke is there to support him in this rough patch. Hey, she’s going to have some nice catching-up time with her husband. Wives of football coaches basically never get that. I’m curious what their next move will be, since Laura said a few years ago “We have no plans of moving anywhere else.” Now, of course they didn’t have any plans– Brady had just gotten the job as Michigan head coach– nobody plans to move after they get to their new town. But what I am saying is that I think this firing stings particularly bad for Brady, as it was his ambition to stay on there permanently.

Anyway, Brady and his wife Laura got engaged in a funny way. It was 1995. Brady had just gotten a job as an assistant at Michigan, and they were driving up to Ann Arbor when Brady asked Laura if she wanted a piece of candy. She said yes, and Brady handed her an engagement ring. Tricky guy! Their daughter Kelly was born in 1985 and was premature, causing them to stay a month in the hospital trying to get her into fighting shape. She’s fine now though. When I think about it, I think the instance of football coaches having a kid out of wedlock and then getting married ten years later is extremely rare. Try to think of another coach that has done that. Brady was trying to think of the perfect engagement surprise that whole time, and the candy thing was perfectly orchestrated.

In a New York Times article from 2011, the author describes a particular quirk about Brady and his wife Laura Hoke. When one of them goes to brush their teeth at night, they leave toothpaste on the other’s brush when they’re done so the other one is all ready to brush. Store this vital piece of information in your memory vault forever. 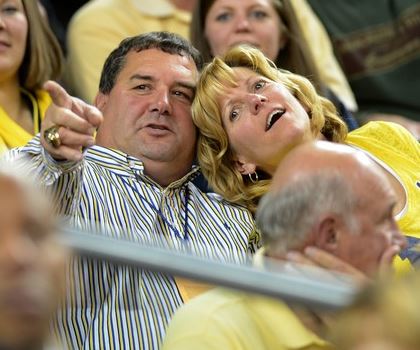