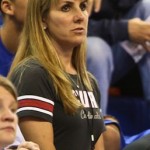 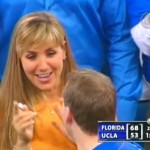 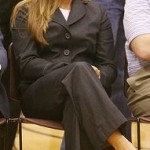 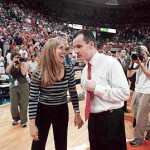 Billy Donovan’s wife Christina Donovan has proven a point for us.

In our week of crazy NCAA coverage, we’ve learned a few things: big time coaches often times have big time hot wives, coaches wives are almost without exception active in the charitable community, and coaches and their wives seem to have a lot of kids. One other trend that’s been appearing time again is the coaches who have kids that go on to play college ball of their own.

To meet the typical critera, let’s look at Billy Donovan’s wife Christine Donovan. The couple has four children, William III (Billy), Hasbrouck, Bryan and Connor. Billy is the oldest, at age 19, and also happens to play basketball for The Catholic University of America in Washington, DC. In 2011-2012, father and son squared off in a preseason game, where the elder Donovan didn’t take it easy on his offspring, doubling up Catholic, 114-57. One bright spot for the Donovan’s was seeing the younger Billy lead Catholic U with 13 points.

Mother Donovan, Christine, let her husband know that she was not particularly excited about seeing the Billy’s square off. Billy told Florida Today that Christine’s, “Not great with it, I think it’s hard for her. I think she’s happy it’s an exhibition game, you know what I mean? ”
Billy and Christine Donovan were married in 1990. 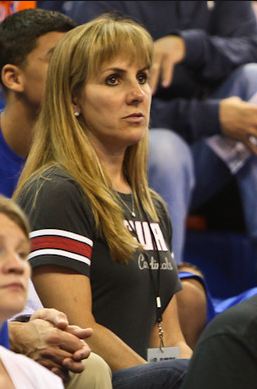