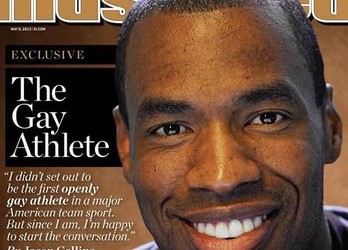 In a landmark announcement, NBA Center Jason Collins announced that he is gay. While many may be here looking for information about Jason Collins husband, or Jason Collins boyfriend, unfortunately, we’re not going to chase our trademark post this time. And while we regret that we don’t have that information for you, we’re happy to have the opportunity to write this post.

I’m a 34-year-old NBA center. I’m black. And I’m gay.
I didn’t set out to be the first openly gay athlete playing in a major American team sport. But since I am, I’m happy to start the conversation. I wish I wasn’t the kid in the classroom raising his hand and saying, “I’m different.” If I had my way, someone else would have already done this. Nobody has, which is why I’m raising my hand. – Sports Illustrated, May 6, 2013

I’m a straight, white, middle class, 32 year old father and husband. Some would probably call me a republican, others would likely call me an idiot. I’ve been through personal tragedies and triumphs and the majority of the rest of my life has seen everything in between. However, no matter what I have or will go through will ever expose me to the challenges faced by so many from different economic classes, or races, or sexual orientations. I’ve never known what it’s like to hide who I am from my friends and family, saying nothing about professional sports fans from coast to coast.

Ten years ago – this announcement brings sports media to it’s knees. Social media seemed to follow the pattern of offering their words of support and moving on the the pressing issues of Troy Tulowitzki missing a game for a sore shoulder, or the first round of the NBA playoffs continuing tonight. Outside of a few individuals with religiously charged commentary(Chris Broussard) or just ignorantly driven dum-dum comments(Mike Wallace), the support for Collins has been incredible. It proves how far the formerly good-ole-boy sports world has come. Hell, it shows how far this society has come. People are supportive and proud of Jason Collins for breaking the gay athlete barrier and are rightfully acknowledging the bravery of this announcement. However, people just don’t seem to care about the fact that he’s gay one way or another. Ho-hum isn’t the right word to describe the reaction – there has certainly been plenty of reaction, but the focus was placed on the event of the announcement, and not the subject that he is gay.

Without minimizing the importance of what’s transpired today, this announcement shouldn’t impact someone like me. But it does. Without trying to oversell it’s importance, and despite how granular it may feel to break down in this fashion: A journeyman backup center announcing that he is gay impacts all of us. Whether it’s NBA players in the locker room, or Jason Collins twin brother Jarron Collins, or another gay athlete not quite ready to come out, or a 32 year old straight white man – this announcement impacts all of us in admittedly different ways. While so many will feel much stronger personal connections to the struggles that Jason Collins has, is and will experience, someone has a more holistic, global perspective. I cannot get beyond the surprise of sports fans across ages, genders, races and locations heard the news and breathed a collective “Oh cool.”

Jason Collins will forever be written as the first openly gay athlete in a major men’s professional team sport. He’s helped to expose how far America has come on many social issues to hear this news and shrug their shoulders (while still respecting what’s actually transpiring here).

To prove how equal we see him, the the next post we write about him will be back to our trashy gossip effort to find out who he’s dating. 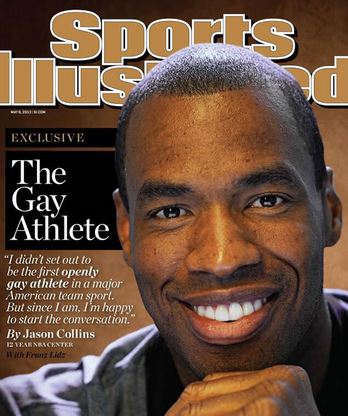