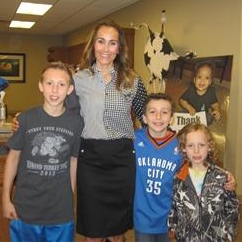 Despite being the mirror image of Marty McFly, Scott Brooks’ Wife Sherry Silvey Brooks still married him. Or maybe it was because he looked like Marty McFly that Sherry Silvey decided to become Sherry Brooks. After all, Marty was a dreamboat and that movie did come out when Scott and Sherry were sophmores in college – so the timing is right.

Either way, the former high school sweethearts (at East Union High School in Monterey, CA) were married in 1993 in Monterey, CA. At Pebble Beach. On the 18th hole. Yep, you read that right. The couple honeymooned in Europe and then Scott returned to the Houston Rockets for their 1993-94 championship season. That’s a pretty amazing year huh?

Scott and Sherry have a son, Chance, and a daughter, Lexi. Since Chance was born, Scott Brooks has worn a woven bracelet on his right wrist to signify him. Scott now wears three bracelets, one for Sherry, Chance and Lexi. The bracelets eventually wear out after about nine months of constant wear, at which point Chance and Lexi make new bracelets for him to wear. The bracelets are a constant reminder for Scott of his kids and he says it helps him to keep his temper in check, especially with the refs. He’s going to need a few extra bracelets for this year’s NBA Finals though, as the refs treat LeBron like he’s incapable of fouling.