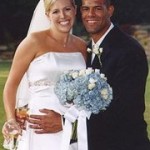 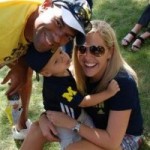 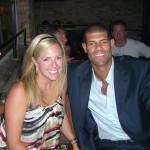 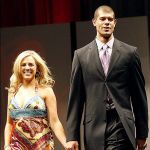 UPDATE: 04/17/2010: When the Grizzlies traded for Shane Battier at the trading deadline last February, Shane was forced to leave wife Heidi Battier, who was seven months pregnant, along with their son Zeke, back in Houston. Fast forward to April 17th – Battier not only hit the game-winning 3 pointer to lift the 8th seeded Grizzlies over the top-seed Spurs, but Battier’s wife Heidi gave birth to their child. Quite the day for the Battier family.

Shane Battier was a God in college basketball. He must have had every opportunity he ever wanted while at Duke, but unfortunately, he was long since spoken for. Shane Battier’s wife Heidi Battier has been in the picture since the two got together in high school. They were married in 2004 and had their first dance to Marvin Gaye’s “Let’s Get It On.” They had their first child together, Zeke Edward Battier, in 2008.

Home life is likely fun for the couple. Heidi goes to bed at 10:30 and Shane plays video games after she goes to bed(this is seriously all we can find about these two). It’s nice to know that even a professional athlete has to wait until his better half goes to bed before he can break out the XBox controller.

Shane and Heidi formed the Battier Family Foundation, which is designed to “encourage and inspire leadership qualities in young people.” Heidi also currently serves on the board of the Houston Boys and Girls club. 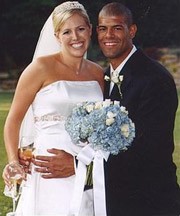