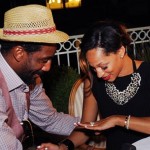 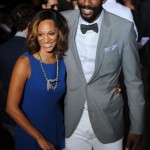 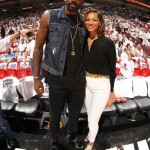 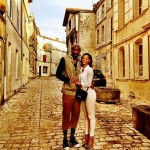 UPDATE: 12/20/2012: That engagement was quick.
Apparently swept up in the 12/12/12 hype, Amare Stoudemire and fiancee Alexis Welch tied the knot in a secret rooftop ceremony in front of a few close family including their three children, Amar’e Jr., Ar’e and Assata. Sources indicate no Knicks teammates were in attendance, and the entire gathering consisted of less than 10 people.
Amare acknowledged the day by tweeing out,

Congratulations to Amare and Alexis.

After leaving Phoenix and heading to the Knicks, we knew for sure we were going to learn all about Amare Stoudemire’s love life… and we did. First we heard strong rumors indicating he was dating Kanye’s ex girlfriend, and video vixen Amber Rose. We then found out that Amare was supposedly dating hip hop star Ciara. In fact, as recently as early 2012, we were hearing reports of Amare and Ciara attending a charity function in New York City together, still looking very much like a couple that had been together and dating for more than a year.

However, as we’ve learned in our three plus years of doing this site, sometimes all the reports, eye witness accounts, insider testimony, and hell even pictures of two people looking and acting like a couple,… it means nothing until the one or both speaks to the relationship.

Finally, Amare Stoudemire has spoken about a relationship.

Amare Stoudemire is now engaged to Alexis Welch, who he has apparently been involved with for years. We can’t say whether STAT and Ciara were ever together, or he and Welch were temporarily broken up, but we do know they are now officially engaged. Welch is the mother of his three children, and the two have been involved since his days in Phoenix. STAT planned his engagement meticulously, and decided to do it overlooking the Paris skyline. In a prepared statement, Stoudemire said

“I have been planning my proposal for a while and overlooking the entire Paris skyline seemed like a perfect place. I am so happy she said ‘Yes’ and now we can continue to build our life together as husband and wife.”

Amare is now more than happy to bring around his once hidden significant other, as he and Welch have been spotted for photo ops repeatedly this summer. They sat courtside together while Amare did his best imitation as a member of the Village people during the Heat – Celtics Eastern Conference Finals. More recently, they were seen mugging for photographers while attending fashion week in Milan together.

There are no wedding details as of yet, but as Amare is not shy about being seen by the press, it would not shock us to have information “leaked,” pretty quickly. We’ll keep you posted. 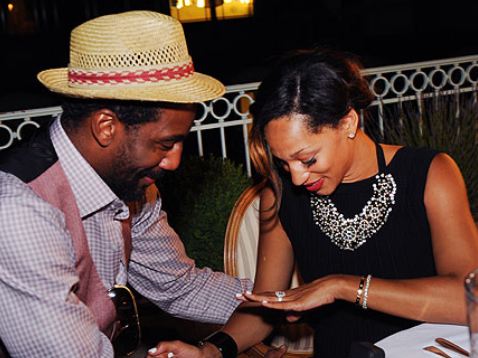