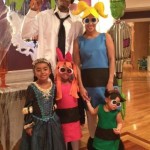 Long before she was Paul Pierce’s wife, Julie Pierce (nee Landrum) dated NBA player Larry Hughes.  There were rumors that persisted suggesting that Hughes was married during the entire duration of their relationship.  However those rumors are unclear at best.  Completely fabricated at worst.

Paul and Julie first began dating in 2006.  After a lengthy engagement, Paul and Julie tied the knot July 17, 2010.  The event took place at an ocean view wedding on the West Coast. The couple’s 2 year old daughter Prianna served as flower girl. The Celtics heavy guest list included Kevin Garnett, Ray Allen, and Doc Rivers amongst the 80 guests.  And while the entire event sounded incredible, the most incredible feat was being able to keep it to 80 guests.  Wish my wife would have consulted them before we got married.

Paul Pierce’s wife is credited with helping Paul during the lowest point of his career.  Pierce told Boston.com just how much she influenced him and helped to right the ship.

She really helped me through that year in 2007, provided me the support when I was down a lot. She’s an amazing woman. We get along so well because we were such good friends. We started dating after the All-Star weekend in Houston three years ago. The next thing I know we’re living together. Man, we clicked, we bonded.

Considering that Pierce was finals MVP the next year, Paul Pierce’s wife will forever be a legend in Boston.

Fifteen Years Together and Counting

Together since February, 2006 and the couple has three children, two daughters and one son named Prince Paul Pierce born in 2013. Landrum’s mother moved in with the couple and acted as a live in nanny after the birth of their first.

By now many have seen the Instagram Live video of Pierce hosting a poker game with exotic dancers.  This video ultimately led to he and ESPN parting ways.  Fortunately, things seem rock solid on the home front, and after fifteen years together, who’s gonna bounce over a stripper or two?  We doubt Paul Pierce’s wife is headed for the exits!