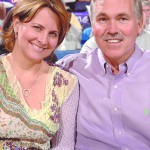 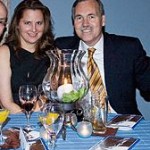 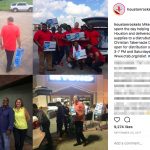 Mike D’Antoni’s wife Laurel D’Antoni shares everything with her husband.  House, life, and a ride to the games?  Yeah, that’s right folks.  IN an article in Paper City Mag, the story is explained further.

The husband and wife team at the heart of the NBA’s best team drive together, to and from, every Houston Rockets’ home game. Sometimes, they talk through potential issues with the team on these drives. Sometimes, the trips are just a chance to decompress or debrief. Some rarer times, they’ll even talk about almost everything but basketball. But they’re always in the car, talking. This ritual started when Mike D’Antoni coached the New York Knicks and a journey to Madison Square Garden meant an hour and half commitment, one way.

Mike D’Antoni’s wife Laurel D’Antoni, and life before the Rockets

Before Houston adopted the family as their own, the D’Antoni’s traversed the country.  For a long time, the couple called Rye, NY home.  Comparing Rye’s offseasons to his time as the Lakers head coach, was a juxtaposing pace of life.  Immediately before he took a job with the Lakers, Mike and Laurel had to take a brief residency in a retirement home.  Yes for real

He’s recovering from reconstructive knee surgery, leaving the hospital shortly after Sandy rocked the East Coast and left many without power. He had to take a bed in a retirement home.

“Here I am in my 60s, my wife thinking I like board games and Jell-O. I was worried when the electricity came back on she might just leave me there,’’ he says.

No, Mike D’Antoni’s wife didn’t leave him.  He has plenty of career left in the tank.

Mike D’Antoni’s wife and her contributions to the community

Laurel D’Antoni is a consistent presence in the fill-in-the-team Wives & Girlfriends club.  Most recently, in Houston, Laurel is a driving force in the charitable endeavors for the Rockets Women’s Organization .  She’s helped generate more than 10,000 book donations partnered with the Barbara Bush Literacy Foundation.  She’s a frequent contributor at  local fundraisers, and has consistently grown roots in any community she serves.    Following Hurricane Harvey, both Mike and Laurel were prominent figures helping the city get back on it’s feet.

Mike and Laurel were married in 1984 after originally meeting in Italy while Mike was playing basketball.  Together they have one child, a son named Mike. 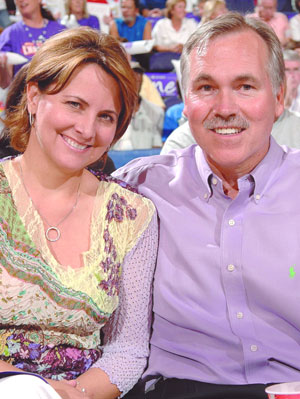