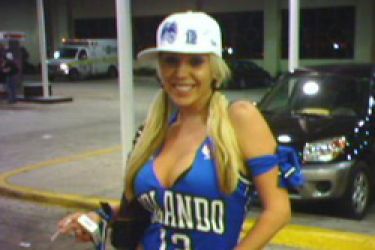 Apparently – NO. In a PlayerWives.com First, we’re going to allow the lady/pornstar/celebrity-rehabber to tell the whole story.

“Yeah, Dwight and I met at LAX. I was like, you’re a basketball player, and he was like, I’ve seen you at Magic games, so he recognized me from games. I used to always get written up when I went to games for causing distractions and stuff.”

Here’s where it gets interesting(again, as told by Melky Cabrera’s ex girlfriend Mary Carey):

“Dwight’s a cool guy. For a month, we like talked on the phone, and he was always trying to give me prayers to get me out of porn and give me Bible verses to read. So then, I was going to go visit him when I was in Orlando, but I went over to this other guy’s house instead, Chris Kirkpatrick from N’Sync. And then Dwight started calling, and calling, and calling me, because he knew I was with Chris Kirkpatrick, so eventually at 3 in the morning, Chris was like don’t answer Dwight’s calls. I get a text from Dwight at 3 in the morning – I’m outside Chris’s house. I’m like oh my god, what do I do? I was like, I got Dwight here and I got Chris in the other room and I’m talking to them back and forth. So finally I had to just pull Dwight in the bathroom and tell him he needs to go home. I was like I’m really sorry, I really like you, but this isn’t the time or place. When I pull him in the bathroom, he pulls his pants down, I was like, whooa. Yeah, and so I ran and started screaming…Well if it wasn’t for the Chris thing at the time, I really liked Dwight and maybe I would have furthered this. But I was at the guy’s house I was dating so it was inappropriate. So he totally thought he totally offended me. So I saved – he and I used to talk on instant messenger, on AOL – so he was apologizing; sorry, that was out of character for me, blah blah blah. I saved all the instant messages and I’ve been putting them all in a book. So I’ve got a lot of evidence. I’ve got an evidence file.”

We asked it the last time with the mother of Dwight’s illegitimate son and caught a lot of flak for it. We’ll try again:

Hey Dwight, What Would Jesus Think?

We want to acknowledge Carmichael Dave at KHTK in Sacramento who did the interview with Mary Carey today.  They transcribed the entire interview, and also have an audio link to the conversation.  Check it out here 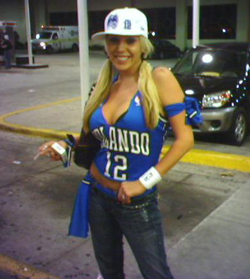