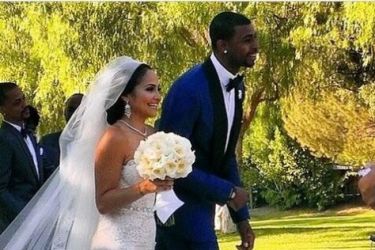 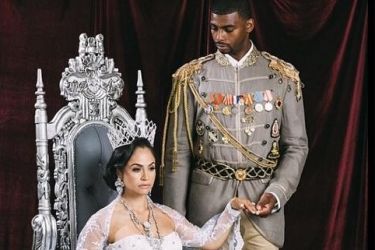 Dorell Wright’s wife Mia Lee Wright had plenty of baby mama drama to worry about over the years. Or maybe she didn’t worry at all– you never know. Big Dorell allegedly got his other girlfriend pregnant while he was also dating Mia, and Mia also had a child whom Dorell is helping raise. A site called tattletailzz.com thinks that the baby belongs to DJ Quik and not Dorell, though we remain neutral and without an opinion. This drama with the “side piece” allegedly occurred sometime in 2013 (as it was reported on various gossip sites in late 2013). The woman’s name is Specelle (apparently pronounced “special”). Well, she wasn’t special enough to marry Dorell!

Dorell and wife Mia got married in August of 2014, and their engagement photos are pretty awesome. One picture features Dorell and Mia in some sort of regal attire, and another picture features them on a motorcycle overlooking a city. Pretty cool. There were a bunch of famous NBA players at the wedding like Dwayne Wade and Chris Bosh (from Dorell’s Miami Heat days).

Mia herself is a former model who was featured on a series of books called The Cheetah Girls written by Deborah Gregory. Disney also created a tv show with the same name but used different people to play the actual girls, so Dorell’s wife Mia was left out of that. There’s also other online internet drama that’s been posted by others involving Dorell apparently sending pictures of his private parts to another woman (not Specelle). It’s hard to keep up with all this he-said she-said. The picture that Dorell sent the woman is online and is not a classy representation of professional basketball players. It must get difficult being a professional basketball player with a bunch of money because whatever you do is going to get plastered on the internet.