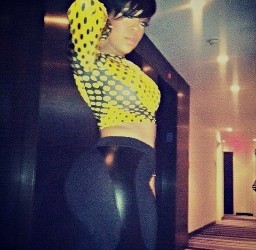 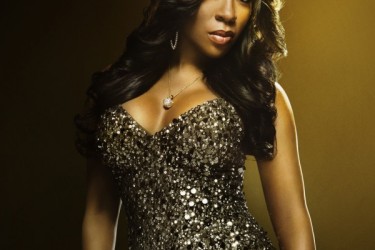 Say what you want about J.R. Smith (and there certainly is a lot to say), but he is 1) having an insanely good year for the New York Knicks and 2) he looooooooves himself some booty shots on Twitter. Everyone remembers back in March of 2012 when J.R. Smith’s girlfriend Tahiry Jose’s backside made an appearance on his Twitter feed. While most people had a good laugh over the photo there was one person not laughing. That was of course David Stern, who fined J.R. $25K for the Twitter picture. Apparently J.R. didn’t fully learn his lesson as we all got another booty shot in early December, this one of his new girlfriend Kimberly Michelle Pate.

K Michelle, as she is known in the hip-hop world, is a singer and one of the fine ladies on VH1’s “Love And Hip Hop Atlanta”. This picture isn’t quite as risque as the first booty shot back in March but there is still a lot of booty to love. So much booty that someone from the Knicks or maybe even K Michelle herself got J.R. to quickly take the post down. So while J.R. still hasn’t figured out that posting the picture is a bad idea he has learned to take the picture down shortly after posting it so we do have some baby steps with J.R.

As we mentioned K Michelle is one of the stars on the hit VH1 show. The show has also earned her a multimillion dollar lawsuit from MeMpHiTz. See MeMpHiTz and K Michelle not only dated but he was her manager. That relationship ended and on the show K Michelle, while not naming who she was talking about, said her ex-lover and manager abused her. Of course everyone assumed she was talking about MeMpHiTz so he filed the a defamation of character lawsuit. One other interesting tidbit on K Michelle is she has a five year old son Chase. Her first album should drop sometime in the summer of 2013. Maybe she can use the photo J.R. took as her album cover. 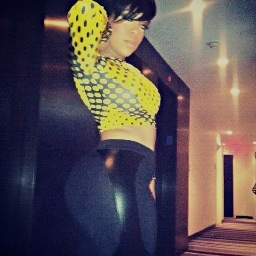