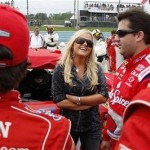 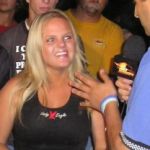 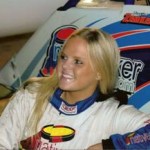 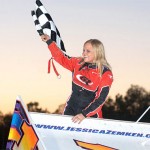 After being involved in a wreck, Ward exited his car and was walking across the track. Stewart came around a turn fishtailing and was unable to stop striking Ward and sending him into the air. He was later pronounced dead.

Stewart still plans to race at Sundays race at Watkins Glen, a much needed race in the chase for the cup. Ontario County Sheriff Philip Povero said there is no open investigation, and that Stewart is “visibly shaken by this accident.”

Our thoughts are with all of Kevin Ward’s family and friends, as well as Stewart in this time.

One of the first NASCAR posts we ever wrote during our infancy of the site was about Tony Stewart’s girlfriend Jessica Zemken. While very little was known about the couple, we did know enough then that online speculation was insufficient to establish a true relationship.

Fast forward five years, and it’s pretty apparent that Jessica Zemken is (or at least was) Tony Stewart’s girlfriend. Zemken is a 28 year old, Sprint Cup and World Of Outlaw driver who also attended Hudson Valley Community College. It’s not entirely clear how long the two were together, as the official start to their relationship is likely blurred. There is plenty of chatter that the couple was first a mentor/mentee relationship between the uber successful Stewart and the fledgling rookie Zemken.

As many of these speculative romances go, rumors of their demise are as quick and seemingly viable as their start. Since early 2011, there has been more speculation that the couple has split up. In an interview before a New Hampshire race, Stewart said:

“We got rid of some dead weight earlier this week, so it made it a lot easier. It’s been a big weight lifted off our shoulders. Just sometimes you have to make adjustments in your life, and we did that and it has definitely helped.”

“Dead weight,” became fodder for media and drivers alike. ESPN even ran a column speculating on what exactly the dead weight in question was after comedic exchanges with other drivers like Brad Keselowski and Dale Earnhardt Jr. Earnhardt asks aloud what everyone else was thinking:

“I wonder what he did? Maybe I should go ask. … I don’t know what he did, whether he broke up with his girlfriend or fired somebody.”

While we thrive on interpreting the meaning of intentionally ambitious statements, Stewart made it clear when telling SB Nation about his breakup, “She drives for me, so I guess I’ll see her again” 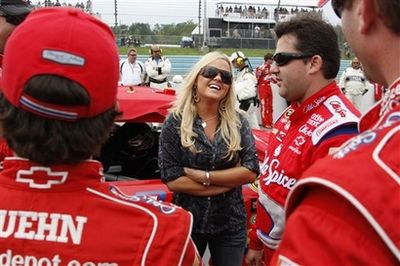