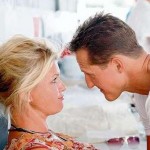 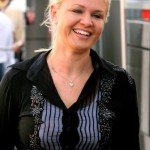 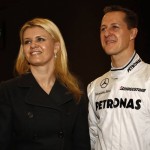 Michael Schumacher, one of F1’s greatest all-time drivers, is currently in critical condition following a skiing accident in the French Alps. Michael Schumacher’s wife Corinna Schumacher (nee Corinna Betsch), is currently by his hospital bed while he battles for his life. Early reports indicate that Schumacher was skiing outside a marked trail, and fell, striking his head on a rock. Despite Schumacher wearing a helmet, immediate attendance by ski patrol, and a hospital airlift within 15 minutes, he has still fallen into a coma suffering brain injury.

Michael and Corinna were married in August, 1995. The couple has two children; Gina-Marie born in 1997 and Mick born in 1999. The entire family lives in Switzerland on a 7,000 square foot mansion with their two dogs. Michael originally met Corinna in 1990, while she was dating one of his teammates, Heinz Harald Frentzen. Once they broke up, Michael went in for the kill, and he and Corinna have been together since.

Schumacher is widely renowned as a family man. Other drivers on the tour are quick to point out how respectful he is of his wife, often crediting her for his inspiration, focus and youth. In response to a question asking his secret to staying young, Schumacher told F ormula 1 Magazine there is no secret:

No, only the good care from my wife Corinna. She keeps me young and fit.