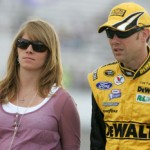 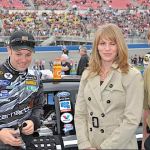 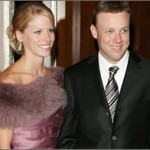 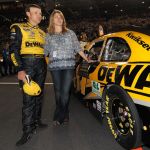 Matt Kenseth’s wife Katie Kenseth was practicing racing a car for charity in 2011 when she was involved in a scary accident. In the crash Katie broke her shoulder blade, but escaped otherwise more significant injury. She was racing a Bandolero car which is pretty much a go cart with a body around it. They can reach about 50 miles per hour at the max. Katie did not have a lot of time to slam on the brakes due to the nature of the crash.

Before becoming Matt Kenseth’s wife, Katie Martin grew up on a farm in Cambridge, WI.  Cambridge is the same hometown as Matt.  Though Katie was much younger than Matt, she admits to having a crush on him from a young age. The two didn’t get together until reacquainting at the wedding of a mutual friend. Matt and Katie eventually married in 2000. In advance of their second child being born in February, 2011, Roush Fenway racing has hired a stable of backup drivers to be on hand at upcoming races in the event that Katie went into labor.

Though Matt and Katie Kenseth do not have their own charitable foundation, the couple still does more than their fare share to given back.  In 2014, the Kenseth family released a book in Dollar General stores on National Youth Literacy Day.   Matt Kenseth’s Race Against Bullying was their first book.  It aimed to help guide children through difficult situations that may arise from bullying. All promotional material around the book indicates it to be the first in a series.  Though no further publication since 2014, we would expect the next chapter to be released soon enough. 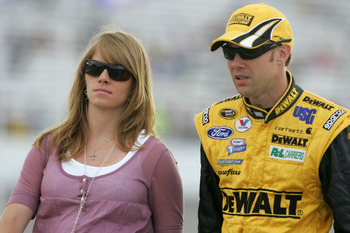