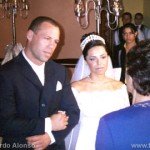 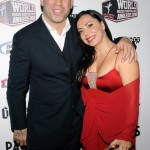 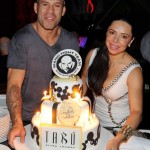 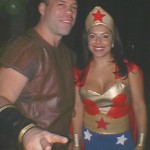 OK. Although Tea is not in her prime… she still is pretty nice. I’m not going to jump all over her and be like “Oh wow she is super hot,” but you have to give her props for looking at least decent. She clearly has had a little work done on her face….you can tell by looking at her lips. Perhaps she was trying to get those BJL’s that Angelina Jolie has. She kind of has the Fergie working against her in the face though. She actually looks pretty jacked in that bikini shot so I’m wondering what the timeline was of all these pictures I found. I mean obviously the wedding photo is from a while back. Who knows. Part of me feels like Wanderlei would be the type of guy that would offer up his wife too. I can picture him putting his arm around me and saying something like “Go ahead, take her for a ride” in like a Brazilian accent. lol. You never know.

Wanderlei Silva married Tea a long time ago. They have a son together and you will never guess his name. Give up? Thor. They actually named their son Thor. Who does that? Really? Thor? Thor people. THOR! [Editor’s note: That’s badass. No two ways about it.] Anyway Wanderlei also has another son from a previous relationship and they now live in the Vegas area. Wanderlei Silva was in his prime when he fought in Pride over in Japan and pretty much cleared out the Welterweight division there. His nickname is The Axe Murderer for a reason. Guy was nuts. He has the scariest stare downs ever too. I posted a GIF when he challenged Liddell when he returned to the UFC. Guy is nuts. And he has a head tattoo. Need I say more? If this guy glared at me like that before a fight I think I would pretty much poo myself. SHORTS PLEASE!
2011-10-24 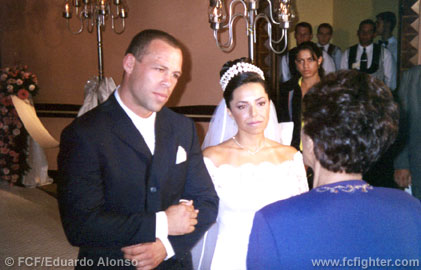