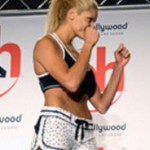 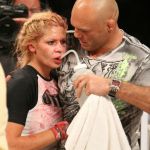 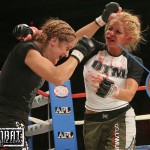 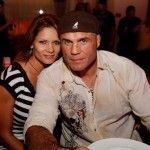 Kim Couture is the ex wife of the famous Randy Couture. While she was married to Randy at some point thought “since I’m married to a world famous Mixed Martial Artist… I might as well give it a try.” Not a good idea. Every time this girl sets foot in the cage in the Strikeforce promotion she gets destroyed. And you end up feeling bad for her while you watch. She has an overall losing record of 3-4. In one fight she clearly had her jaw broken which I have happily posted the pic of. Yummy right? The worst part is she kept fighting with the broken jaw. Can you even imagine the pain of having a severely broken jaw and then still taking punches to it in a fight? I mean what the F was her corner thinking not throwing in the towel? When I first started writing this post I assumed Kim Couture was probably somewhere in her 40s which led me to believe she looks good for her age. Turns out she was born in 1975 making her only 35 years old! Alrighty then.
Before her MMA career she was also a police officer, played basketball, and ran track. She has a son from a previous marriage and a daughter from a previous relationship. Apparently Kim Couture doesn’t like the feel of condoms. Too far? No such thing. 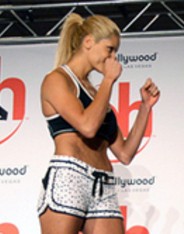