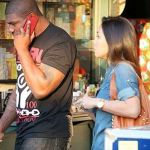 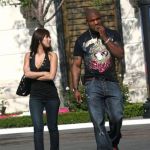 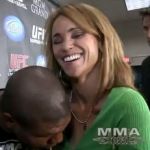 So Yuki is pretty smoking. At first I was kind of like hating on Rampage because I thought he could do better. But then I took a closer look and I thought to myself…. actually she isn’t too bad. She probably hypnotized Rampage with her Asian Persuasion at the beginning. Don’t look directly into her eyes folks…. before you know it she can control you. It’s sort of like looking directly into the sun. Rampage is by far IMO the coolest and funniest dude in the UFC which leads me to believe that Yuki is probably pretty cool herself. There isnt a ton of pics out there of Yuki. If I find some more Ill post them up. If you know of any post the links in the comments section of this post. In the meantime check out that gif of the stare down between Jackson and Jones at the press conference for UFC 135. Rampage was hilarious and you can see Dana White almost peeing himself with laughter behind them. Man… I wish I could hang out with Rampage. It would be like non stop laughter the whole time. Funny guy. Look at that pic of Rampage motorboating a reporter. You old sailor you!

Yuki Jackson and Quinton Jackson live in Ladera Ranch, California. They have two children together and Rampage has two more children from a previous relationship. The three boys are D’Angelo, Raja, and Elijah and the daughter’s name is Naname. All three boys middle name is Rampage (WOW) and then Naname’s middle name is just “Page.” Picard facepalm. It’s stuff like this why I love Rampage. Clearly doesnt give an F. Rampage claims that his children are “blackanese.” One of them is also an albino. Yuki and Quinton separated in 2006 once a blood test proved that Rampage fathered Raja with another woman in 2000. BUSTED. But they put their past behind them and are now together again. Rampage is scheduled to face Light Heavyweight champion Jon “Bones” Jones at UFC 135 in Denver. Should be a great fight. I love both these guys but there is no doubt that I want Rampage to reclaim the title. After all he doesn’t have a lot of time left in his career due to his age.