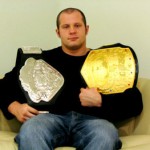 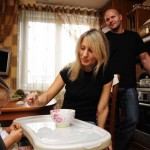 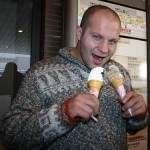 Marina is hot…. I think. If you were to rate her 1 through 10 what would you give her? 6? 7? It certainly isn’t below a 5 right? It’s kind of weird though because in all the pictures its tough to get a good look at her. Don’t get me wrong…. I like Russian chicks. It’s just that you never know what type of Russian girls you are going to get. You can get the super sexy Russian girl with an awesome accent and a stunning body. Or you can get the type with the same voice as Drago from Rocky 4 who has the hairiest legs imaginable. Makes me cringe. Shiver just went down my spine thinking about it girls with hairy legs. Girls take this down…. guys dont like girls with hairy legs. We might pretend that its ok that you missed a few days…. but inside we are all thinking about how gross it is. Its just the truth. I’m sorry. I know it sucks shaving your legs. Trust me I did it once. Don’t ask why.

Marina is the second wife of Fedor and they were married in October of 2009. Fedor has a daughter named Masha with his first wife Oksana and today has two daughters with Marina (Vasilisa and Elizabeth). Elizabeth was born today July 22, 2011. Fedor was getting off a plane to go to training camp for his fight against Dan Henderson today when he received the call that his wife had given birth. We will see how this effects his fight with Henderson since it is only a week away. Check out the gif of Fedor DESTROYING Arlovski. Arlovski was winning the fight until he tried to throw a flying knee once he had Fedor backed into the corner. NOBODY PUTS FEDOR IN THE CORNER! 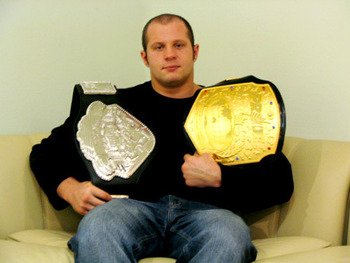