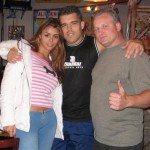 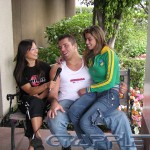 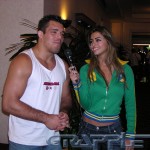 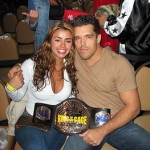 When you are an MMA fighter you get scars, you get weekly bruises, and you also get boat loads of women. I am constantly impressed by the quality of tail that Dean Lister pulls down. This guy marries a model, divorces her, and then pulls the old upgrade to a hotter chick who has prob way more money. Dean Lister has done what every guy wishes they could do. Divorce their fugily looking wife and upgrade to a rich fembot named Milena. Not that Dean Lister’s ex wife is ugly…. just simply pointing out the noticeable upgrade in the smoking hot looks department. Not only that but Milena beats people up in the WWE for a living. I mean is this girl an upgrade or what? Would you rather have a smoking hot chick….. or a smoking hot chick with money that will beat up the other smoking hot chick? I think we all know the answer to that. Bravo Lister. Bravo.

Lister grew up in South America and lived in several countries throughout his childhood. He lived in Panama and was in the combat zone when US troops invaded in 1989. His family then moved to San Diego for his high school years where Dean got picked on a lot. This forced him to look for ways to defend himself. He has since developed into a Juijitsu ace. Lister’s hands could use improvement but you can’t out grapple the man. This is why his UFC career was so short. He was very one dimensional. Before the UFC Lister was the middleweight King of the Cage champion. Today Dean sticks to more coaching and training than competing.

Dean Lister is currently dating Milena Roucka (Sept/2011). She is a female wrestler originally from Canada. Milena works under the name Rosa Mendes on Smackdown with the WWE. She got a job at the WWE by participating in the Diva search back in the day and placing 4th. Today Milena still is hot and I dare you to tell her otherwise. She will most likely choke you out with her legs….which isnt exactly a bad thing. :) 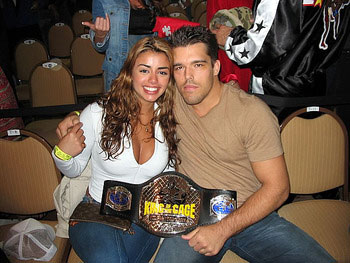