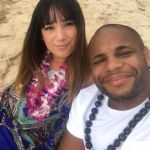 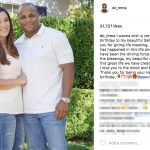 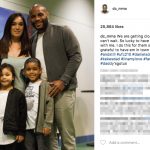 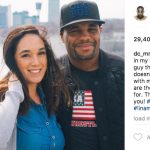 Daniel Cormier’s girlfriend Salina Deleon is the mother of their two children, Daniel and Marquita. Daniel posted a picture of them all together and said, “This is why I fight!” He appears to love to take them on vacation in between big fights. The time following a big fight is a good time for all that. You’ve got to heal those cuts and bruises, and you mine as well do it with a pina colada in your hand!

Daniel posted that Salina is a “shining example of everything the word ‘mother’ means.” Obviously he appreciates her very much. He considers himself a very lucky man, and he says everything else is extra. Clearly, his priority is to love and support his family. I can’t tell you all that much about Salina because she prefers to keep her social media activities private. However, I can you that Daniel Cormier’s girlfriend formerly worked at Hooter’s in Fresno, California. That’s where she is from. Apparently, they got engaged in 2014 in Paris. I don’t think they married yet, though. She did thank Daniel for organizing a big 30th birthday party back in January of 2014. That means she is officially 32 years old.

Salina used to take the kids to the Children’s Discovery Museum of San Jose back in 2013 and 2014. Daniel Cormier’s girlfriend has fun at museums while her kids expore them. Back in November of 2013, she also met Leonardo Dicaprio with some friends at a fight. Leonardo wore a cap with the brim pulled down to his eyes. Salina believes that there is no time to “leave words unsaid” because life is short. I’m sure she lets Daniel and the kids know how much they mean to her. Their relationship appears very healthy, from what I can see in the photographs. Of course, I don’t know them so I can really only go off what they share online. Looks like a happy family!