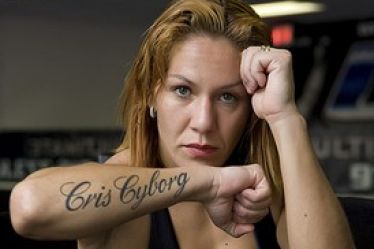 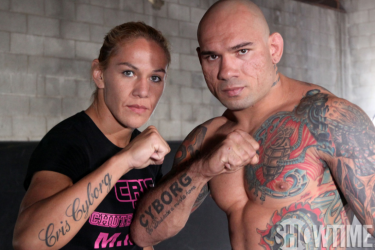 Before we get started, let’s welcome our new MMA resident expert DJ Pullout to the site. Pullout will be bringing us all the wives, girlfriends, or in this case husbands of MMA. Welcome, DJ.

Cyborg (or Cris, Christiane, or whatever she tells you to call her) is pretty much inarguably Strikeforce’s best female competitor at this point. She is one of those ladies who I would go out of my way to avoid pissing off if I saw her in a bar.There’s really no other way to put it other than she just beats bitches up.

Her husband is a long time MMA vet (Evangelista “Cyborg” Santos) who isn’t exactly the nicest looking guy either. After beginning dating and living together in 2005, when Cris was fighting in Sao Paolo.

After living together for only three months, the two decided to get married. The two don’t currently have any children, but Cyborg has admitted that she does want to have kids someday, and will plan to take a year and a half off to do it, but right now, she’s only focused on her career.

Cris is Strikeforce’s middleweight women’s champion which she won by demolishing the ever so good looking Gina Carano (I’ll give you one guess which one Gina Carano is in the picture above).
There are rumors of Cris signing a WWE contract which is bad news for the female wrestlers out there in the world. Oh what… you don’t think she is a badass? Check out the dragon tattoo she shows off on her website.

We all know that someone with a dragon tattoo is someone you don’t want to mess with. 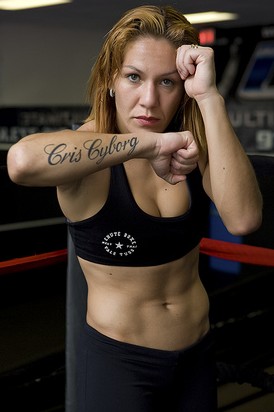