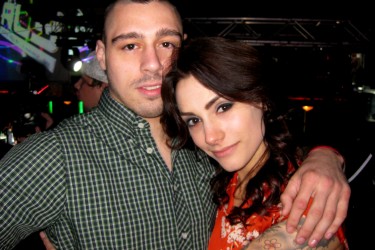 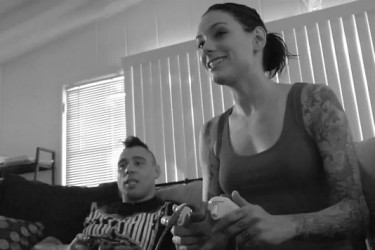 UPDATE: It’s never really fun to write this part of it, but our old friend Elizabeth Holloway has reached out to us to let us know that after seven years together, she and Dan Hardy are no longer together. We don’t have many details to the split, but we don’t really need them either.

Thanks again to Elizabeth for reaching out to us, and we want to make sure that any future date for Elizabeth knows for sure that Dan Hardy is not in the picture and there’s nothing to be afraid of!

In the 2.5+ years we’ve been operating this site, we’ve been contacted by various wives and girlfriends. Some have come calling to demand we take something down, some have contacted us to let us know there has been a status change in their relationship, while others have contacted us because they’re pissed off that we sent them a wedding gift off their public registry.

No WAG, however, has ever contacted us to let us know that we’re using old pictures, and they wanted to send us new pictures to give their star rating a bump.

Just a few weeks ago, resident MMA expert DJ Pullout wrote a post on Ms. Holloway. It wasn’t long until she came calling in her own defense. With her tongue planted firmly in cheek, we got the email from her stating:

Ya’ll seriously need some better pictures of me. Those are from years ago. You are killing my rating =) Let me know where I can send them in. Love your site.

After providing some indisputably hot pictures, an email conversation ensued, and it wasn’t long until we had convinced Elizabeth into a feature interview on her life as the girlfriend of an up and coming UFC star. At the very end of the interview, Elizabeth dropped a bomb on us, allowing PlayerWives to have the scoop on some exciting news. Read on:

PlayerWives.com: OK, so when we first posted your profile, we said that you came from a “yummy mummy.” Without asking you the awkward question of how would you rate your mom on a star scale, tell us a little bit about yourself. Where were you born and raised? Where do you live now?

Elizabeth Holloway: For the record, I’d give mom was a 9.5 when she was my age. Imagine a young and thin Liza Minnelli, minus the beak.

I was born in a cabbage patch on Whidbey Island, WA, and raised all over the place. My dad was Navy, so I’ve lived all over. We live in Las Vegas now because I have a gambling problem.

PW: When did you meet, and how long have you been with Dan?

EH: Met Dan in 2007 at an MMA gym in Hollywood. I know, I know. Stereotypical. I was training muay thai at the time, and he was over to train from England. We’ve been together ever since.

PW: How have things changed during his rise to becoming one of the most recognizable fighters in the UFC?

EH: People want to hang out with me now! Joking. To be honest, we travel a lot more now for the UFC, and see our friends and families a lot less. I’ve had to transition from a corporate job to self-employment so that we can spend more time together. Our life is built around the sport, and everything else comes second to training camp. Our fridge gets whiplash between training camp diet food and post fight junk food!

PW: Unlike a lot of the women we cover, you have your own career – tell us about what you do. (Feel free to plug anything you want here)

EH: I own a small business that specializes in UI/UX design with is User Interface and User Experience. We’re basically in the business of cleaning up the web and mobile world and streamlining sites and apps to be easy for people to use. On any given day we can be working on logos, merchandise, iPhone apps, websites, you name it!

PW: More so than with any other sport, as the girlfriend of a UFC fighter, you have to watch Dan take physical abuse with the potential for serious injury – how do you cope with that? Do you watch his fights?

EH: I go to most of his fights. I realize that being in the ring is what he looks forward to more than anything. I wish I could say the same! Obviously, I go into the fight praying that he comes out with no serious injuries. However, the cut men of the UFC are some of the best, so it’s reassuring to know he’s in good hands. I normally caffeinate heavily before the fight on account that I haven’t been sleeping. I exercise and read a lot to keep myself occupied. Oh, and I also emotionally shop at the Converse store. They need to sponsor me.

PW: How often do you travel with Dan when he has to fight somewhere far away?

EH: Whenever I can. The airlines love me and my multiple suitcases. I’ve been to all of his fights for the past 2 years. I’ll also go with him if he’s on the road for appearances and expos. He’s British and I’m American, so our time together can be limited having to split our life between two countries. We try and make the most of it.

PW: Assuming you do travel with him, what’s the craziest thing you’ve seen in a UFC after party? What about during an actual UFC event? (and obviously feel free to protect the parties involved here… we won’t name names).

EH: That’s a tough one. The Montreal club scene is pretty crazy. They really need to label some of those parties as nudist events.

PW: Which one of Dan’s fights impressed you the most? Why?

EH: UFC 111 against Georges St. Pierre. He got a title shot really early in the UFC because he got paired with a top 10 guy when his previous opponent pulled out. He was the underdog in that fight by a landslide, but he ended up making one of the best pound for pound fighters in the world look seemingly average. He got caught with some really nasty submission attempts that had people in the crowd covering their eyes, but he never tapped and never gave up. He earned a lot of respect that night.

PW: We know a lot of pro sports teams have “wives clubs.” Obviously the UFC is different in a non-team setting. Are you friendly with any wives? Do you find any animosity from a fight leaking over to the WAG of Dan’s opponent?

EH: There is a pretty clear divide amongst UFC WAG’s depending on their partner’s pay scale. Most of the women are either employed and holding down careers and families, or they’re a little more well off and can afford to live a more high-profile lifestyle. Of course, there are exceptions to that.

I’m good friends with a few of them. It’s nice to have women around you that understand the emotional ups and downs of the sport. If you’re winning, everyone wants to be your friend. If you’re losing, your phone doesn’t ring. Regardless, it can be really lonely, and we all try and support each other.

I don’t ever run into the WAGs of Dan’s opponents. Since they are usually from all over the world, we don’t have the opportunity to meet. It’s probably a good thing.

PW: Are you and Dan friends with any other athletes outside UFC? How do you know them?

EH: We watch a lot of hockey and cricket in the UK, so we’re friends with some of the Nottingham Panthers (hockey team) players and some of the Nottingham Outlaws (cricket team) guys. We know them just from going to games. Dan will sometimes give them tips on fighting during games. We run into a lot of NFL guys that are big fans of the UFC as well.

PW: You have some serious tattoos – tell us about a few that have specific meaning to you? Have you ever regretted a tattoo? How old were you when you got your first one? Explain.

EH: The day I turned 18, I was at the tattoo shop. My favorite is my tattoo of a cardinal and dogwood flowers. It’s got a banner that says “Dixie.” I’ve spent most of my life in Virginia and North Carolina, and I love the South. It’s a really beautiful place with good people.

Also have one on my knuckles that says “1989.” Most people ask me if that was the year I was born. It was the year that Slovakia got its independence. My mom’s side of the family is from there, and it’s a good reminder that you can achieve progress through non-violence. Look up the Velvet Revolution. It’s a good piece of history.

I’m not feeling so good about my Jedi tattoo these days. Although I’m a massive Star Wars fan, it’s not a great tattoo, and I didn’t really think that one out too well! I don’t regret it though. It’s getting lasered though!

PW: Any cool hobbies you could share with us? And please don’t say planking or owling…

EH: Can I say noodling? Catching catfish with your bare hands is pretty big in the South. Really though, I’m pretty normal. I read a lot and dedicate most of my time to my small business. I do like to sew, and I’ve recently taken to antiquing furniture in 100 degree heat to work on my tan. I go to a lot of “alternative” music shows; I love stand up comedy.

PW: I see that you two play xbox. What are some of your favorite games to play? Are you planning on getting Modern Warfare 3 when it comes out in November?

EH: Oh yeah, did you see me school him at the UFC Undisputed? Bioshock is pretty good. I love games with original concepts like that one. Beatles Rockband, or any kind of Rockband really, is my thing. Dan always gets really annoyed when he comes home and the microphone and drum kit are in the middle of the living room. He’s more of a tactical war game kinda guy, so yes, we WILL be getting Modern Warfare. I would play more Xbox but somebody is always on it.

PW: Clearly you are in great shape. Do you participate in Dan’s insane workout regimen in order to keep fit?

EH: Thanks! When we work out outside, I’ll run with him, and then I’ll watch him do his pushups and pullups =) I’ll sometimes have him write me strength training workouts, but nothing MMA related. I just generally run a lot, go swimming, use the cardio machines at the gym. Nothing crazy.

PW: If you end up having two kids with Dan will you refer to them as the Hardy Boys (sorry, we had to ask)?

Without even knowing, Elizabeth let us know that she can now be called Lady Outlaw, since Dan has proposed to her. When pressed for details as to how it all went down, the future Mrs. Hardy said, “Dan was quite clever about proposing. He wrote a note on the bottom of something I was reading, and it said “turn page over”…”Will you marry me.” Very clever, indeed. No plans or dates yet!”

Special thanks to Elizabeth for her time and clever, well thought out, wide ranging interview. Best of luck to her and Dan. Next time UFC is in Boston, PW.com will bring you out… first rounds on us. 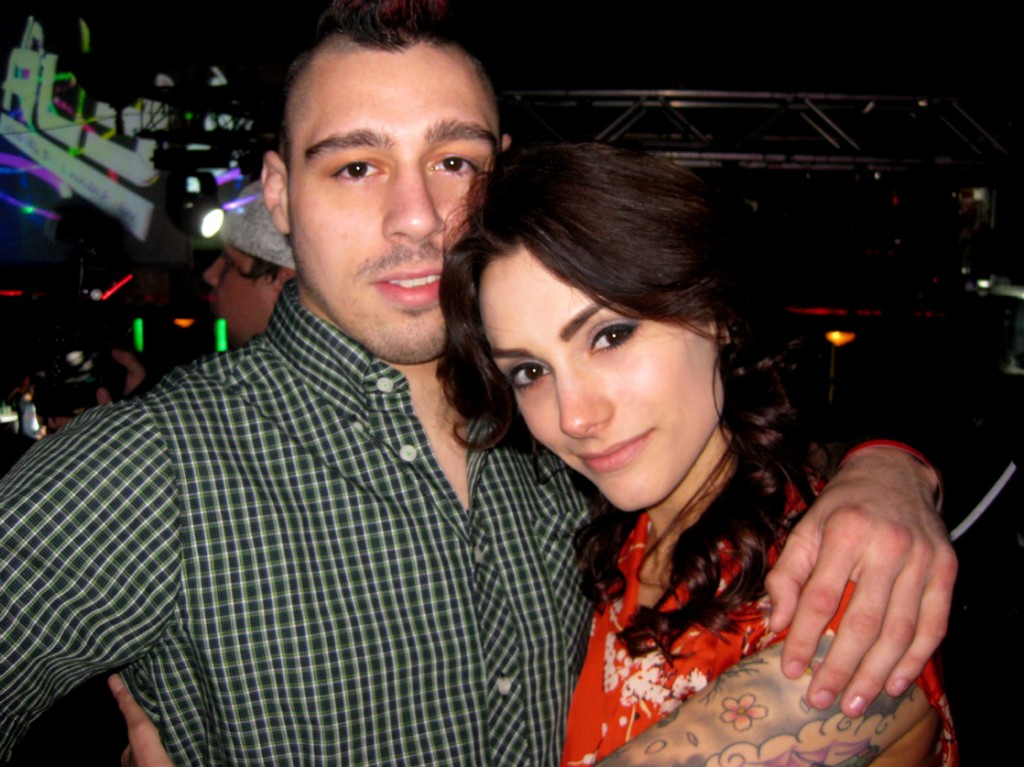