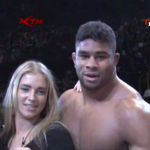 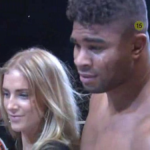 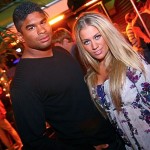 UPDATE: 09-07-2011: Alistair Overeem will be debuting in the Octagon against Brock Lesnar on December 30th. This will be one of the biggest fights (literally) this year.

Alistair Overeem’s wife is Zelina Angela Bexander and she is def hot. Fake boobies, nice face, blond hair, and she prob has a great accent since they live in the Netherlands. Also check out that pic where Zelina is straddling him in the ring after he won the K1 tournament… you know she is a freak. Only a slut would run up and straddle her man like that when millions are watching on TV. I mean you think Cameron Diaz would run up to Arod after a win and on national TV give him a celebratory straddle? Arod would probably power slam her unconscious directly on the 3rd base bag and leave her there. I’m not complaining about celebratory straddles…. I like a lady in the streets but a freak in the bed myself. But Arod…. definitely not. Loser.

I know Alistair has a daughter named Storm. Before you go making fun of Alistair’s choice on a name for his kid, perhaps you should take a look at his physique. To be honest, if Alistair killed my mom I would prob let him get away with it. Not only that but I would prob agree that it had to be done just to avoid a beat down. The guy is HUGE. He might have a slightly suspect chin, but I wouldn’t try my chances against Overeem.

Check out the video on the right of one of his recent fights where he obliterates Todd Duffee’s mid section before he lands a flush left hook on Duffee’s jaw. Yowsers!
He’s trying to avenge one of his losses against Fabricio Werdume on June 18th on Showtime as part of Strikeforce’s heavyweight tournament. If you don’t get Showtime…. get a friend to DVR this fight.

While she was still Alistair Overem’s girlfriend, Zelina actually announced that they were engaged on her Facebook account, which we have the link to, but are going to keep for ourselves for late night entertainment. 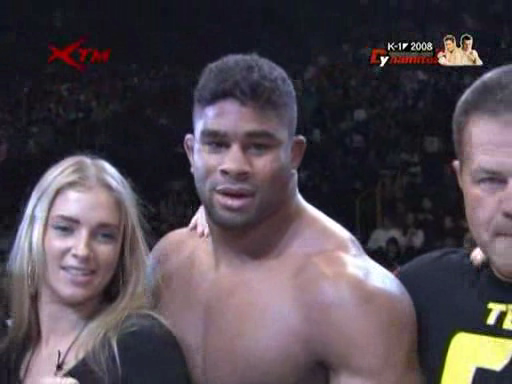