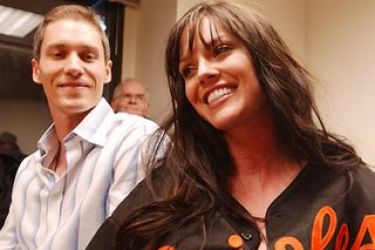 UPDATE: 11-17-2011: Following in the footsteps of their hit show Basketball Wives, VH1 has announced their new series, Baseball Wives. It should come as no surprise to any reader of our website that Anna Benson has been selected for the show. In fact, we wouldn’t be surprised if, in the first annual VH1 Baseball Wives draft, she was the #1 pick. Anna is a train wreck, and as a result, she is perfect for this show.

01-11-2011: perhaps choosing the date for the irony of once being the #1 overall pick, Kris Benson retired from baseball, despite the fact that we all thought he had retired years ago. No word on how long his self-professed “gold digger” wife, Anna Benson, will remain married to him.

Kris Benson’s wife Anna Benson is a woman of strong opinions and strong convictions. She has openly stated that she hates PETA, gun control organizations, and Michael Moore. Her hatred for Michael Moore runs so deep that she at one time publicly posted an open letter to him on her website.

Anna has worked with multiple charitable organizations including the Salvation Army and American Red Cross. In addition, her work with their foundation, “Benson’s Batallion” has raised over a half million dollars for police forces in the city in which Kris pitches.

Kris Benson met his future wife Anna in 1997 while Kris was pitching in the minors and the two were married in 1999. Anna has a daughter named Alyssa from a previous marriage and the two have two children together, daughter Haylee and son P.J.

Anna is no stranger to controversy.
– She once accused Mets GM Omar Minaya of putting together an All Latino Team.
– Benson has posed for both FHM and Playboy, in the process officially overshadowing virtually her husband’s entire playing career.
– She entered the 2005 World Series of Poker tournament under the name “Gold Digger.”
– In 2006, she filed for divorce from Kris, but retracted the filing just a couple days later.

And our favorite controversy ever: Appearing on the Howard Stern show, Anna fired off this all time classic line:
“I told him [Kris] — because that’s the biggest thing in athletics, they cheat all the time — I told him, cheat on me all you want. If you get caught, I’m going to screw everybody on your entire team — coaches, trainers, players. I would do everybody on his whole team.” 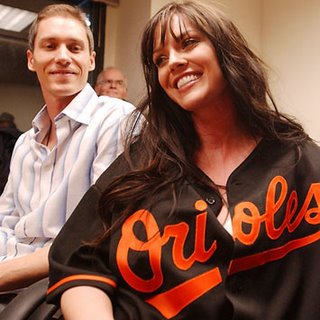