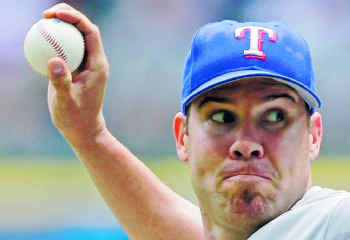 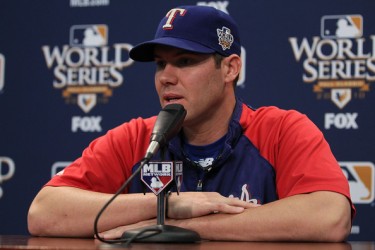 Colby Lewis and his wife, Jenny Lewis are the proud parents of two children, each of which being a landmark in Colby’s baseball career.
In 2007, Jenny was pregnant with the couple’s first child. Colby was bouncing between the Oakland A’s big league club and their AAA affiliate. Colby recognized that something had to change, so he elected to take his baseball talents across the Pacific and play in Japan. In an interview with ESPN’s Tim Kurkijan, he realized, “I’ve got to go [to Japan]. I’ve got to make some money.” Colby notes that the day Washington Nationals cut him prior to the 2007 season was the low point of his career, but also happened to be the day his first son was born.
After spending 2 years in Japan to revive his career, Colby came back to the states in part to have another baby. In the same Kurkijan article, it’s noted that Jenny has Graves’ disease, a thyroid condition, and the Lewis family was encouraged to come back in order to get adequate health insurance from a major league club for her.
Fast forward to April, 2011. Jenny Lewis gave birth to the couple’s second child, daughter Elizabeth Grace. Colby flew to the family home in Bakersfield, CA to be with his family. In this move, he officially became the first player in Major League Baseball history to go on the newly instilled Paternity List, allowing him 24 to 72 hours to leave the team to be with his wife and new daughter.