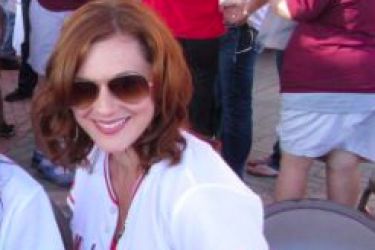 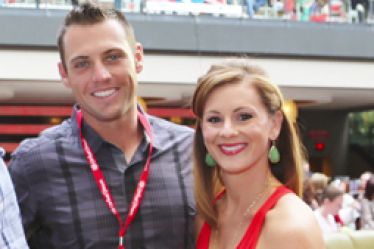 Peter Bourjos’ wife Ashley Bourjos was married in a very classy outdoor setting in Paradise Valley, Arizona. The place is called Paradise Valley– it’s gotta’ be a nice spot to set up shop and get a couple hitched. Pete and Ashley got a classy wedding photographer team to document their entire wedding, and then the team (actually a couple) wrote all about them. So it was no problem for us to get a good feel of what they’re like as people. They were called two of the “kindest, most down-to-earth people” that the photography team ever met. Geez guys, don’t oversell.

We’re talking about a major high school sweetheart pairing here. Chalk it up under “traditional” on the playerwives board. Peter Bourjos’ wife Ashley Bourjos fits the bill exactly. Ashley was formerly known as Ashley Miller, and she’s pretty much grown up with Peter. Three years ago Ashley took part in the Angels Wilves’ Gold Ball Mystery Grab Bag fundraiser for Special Olympics. I think we’ve seen one or two other Angels wives associated with the gold ball grab bag, but Ashley is a particularly cute one. This was all back before the big marriage, which happened on November 25th of 2014. That means Pete and Ashley are closing in on their one-year anniversary. Since they’ve been together since high school, it seems like it’s not such a milestone.

Peter told MLB.com that Ashley’s family was big and that everybody was coming to their house in Arizona for Christmas back in 2014. That would place their honeymoon somewhere squarely between the start of December and Christmas. Peter Bourjos’ wife Ashley Bourjos also just had their first child, and Peter left for a three-day paternity leave to be with them. They named their kid Maxton, which I don’t believe I’ve ever heard before. I like it. After he saw Maxton, he had a long time to wait before he could see him again because he was right at the start of the season, and the doctor said the baby couldn’t fly on a plane for 6 months. Them’s the breaks, kid. 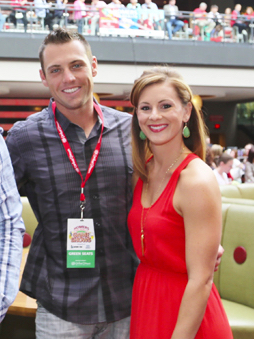