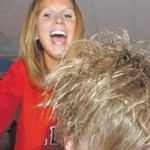 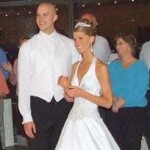 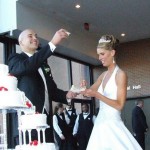 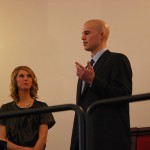 Justin Masterson and his wife Meryl Masterson were married in the fall of 2007 after Justin’s season with the Portland Sea Dogs. Meryl Masterson is one of the most active Red Sox wives in her charitable endeavors. She was recently featured on NESN to promote the upcoming Red SoxFoundation’s Picnic in the Park. She has also been seen at the Jimmy Fund’s “Scooper Bowl,” where she judged an ice cream eating contest, and has competed in many local and charitably 5K runs.

On this site, we’ve often made fun of people for cheating on their partner, for saying stupid things in the press, or for having a sex tape with Ray J, but in this case, there appears to be nothing bad about Justin Masteron’s wife Meryl.

Here are the thing we know:
1. She likes God a lot, and is an active member of a Boston church.
2. She likes to make cookies and has Justin bring them in to the clubhouse to share with his teammates
3. She likes helping charities
4. She once had a clearly privately intentioned blog that discussed the minutia of her daily life as a pro ball player’s wife, before the obsessive Red Sox nation got ahold of it, and she took it down.
5. On this blog, she came across as a very sweet and innocent girl, relating stories about being wide eyed at the site of Manny Ramirez on the same team charter she was on only 3 rows ahead of her, as well as how exciting it was to get served real food on the plane.

Sweet? Yes. Innocent? Looks like it. Good trash talker? Apparently so. The best part of Meryl’s short lived public blog was this line about Justin facing then Yankee Jason Giambi:

And we struck out Giambi. Nice stash by the way. 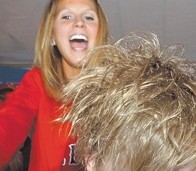