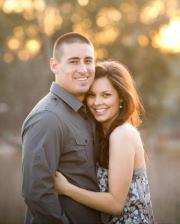 After a world series title with the St. Louis Cardinals (and turning in an arguably MVP performance in the process), the excitement doesn’t end there for Allen Craig. On November 12, 2011, just two weeks after the end of the World Series, Allen Craig will marry his long-time girlfriend Marie LaMarca. Allen Craig met Marie LaMarca while they both attended Chaparral High School in Temecula, CA around 2002 when Allen was a senior. The couple is registered at Macy’s and, despite our numerous past posts regarding athletes and wedding registries, we will avoid the subject this time around.

Allen Craig and his wife-to-be Marie LaMarca have had a tortoise for five years now. No big deal right? Well, it wasn’t – until a fake Twitter account was started for Torty the Tortoise and the team began to adopt Torty was an informal mascot of sorts. Based on the content of the Tweets, the safe bet is that someone else on the team created and runs the account, though no one is saying for certain. Though Allen Craig hasn’t exactly embraced the whole situation, we get the feeling that he isn’t arguing with the outcome. Craig said of the situation “It kind of just got out and now it’s a huge deal. But it’s fun and whatever it takes to keep the team close is fine with me”. No word on whether the Red Sox will attempt to embrace one of their pets, perhaps a gerbil, as an informal mascot in an attempt to win another World Series get back to the playoffs.