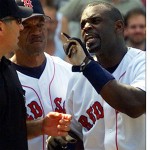 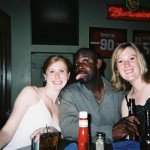 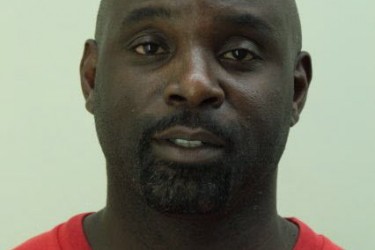 UPDATE: As avid Red Sox fans, we here at PlayerWives.com are very familiar with the famous temper of crazy Carl Everett. That temper once again flared up Monday night, as Carl Everett was arrested for aggravated assault with a deadly weapon after putting a gun to the head of his wife, Linda Everett. According to the arrest affidavit, Carl Everett’s wife Linda Everett attempted to call the police twice, only to have crazy Carl smash both phones.

We have been unable to find a photo of Linda Everett, but we are pretty certain the domestic situation between Carl and Linda involved Carl looking crazy like the first photo and possibly involved some other women like the second photo. The third photo is the mugshot, courtesy of the Hillsborough County Sheriff’s Office.

Carl Everett has been married to his wife Linda Everett for 18 years. The couple has three children. Carl was an outfielder in the majors for 14 seasons for the Florida Marlins, New York Mets, Houston Astros, Boston Red Sox, Texas Rangers, Chicago White Sox, Montreal Expos and, most recently with the Seattle Mariners. Despite having some talent, Carl was perhaps best known for his temper and for his belief, despite overwhelming evidence to the contrary, that dinosaurs didn’t exist. 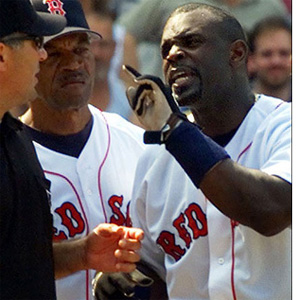