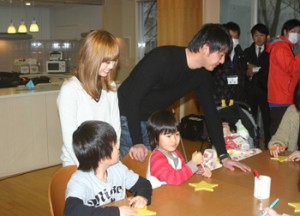 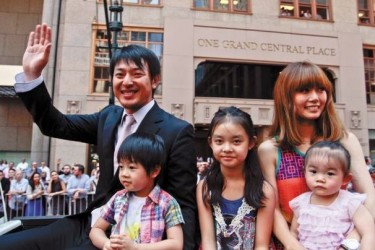 Hisashi Iwakuma’s wife Madoka Iwakuma has created a children’s book with Hisashi in order to give it as a present at a Ronald McDonald House of Charity in Sendai, Japan (also known as an RMH in Japan). An RMH is a place where very sick children go to try and recover from their illnesses. So Hisashi and Madoka get major kudos for helping out the sick kids. This wasn’t even their first time, as they’re widely known to help at orphanages and provide help to children with disabilities. Man, there’s no better way to score humanitarian points than helping out kids. Now I won’t be able to say anything bad about these two.

Hisashi and his cute wife Madoka have got two little tots of their own, Towa and Uta. They’ve rarely been photographed in public but were visible during a parade through Manhattan. The parade apparently was for a bunch of all-stars and led up to the all-star game. Madoka herself is the daughter of Koju Hirohashi, who is some guy who used to coach a professional baseball team in Japan called the Seibu Lions. Baseball’s a big deal in Japan, just like here and some of those little islands in the Caribbean where people can’t wait to leave.

Madoka is probably counting her lucky stars that Hisashi has avoided the nonsense of social media. No tweets and instagram for him. That’s not to say he isn’t using some Japanese social media apps that I’m unaware of. I always feel like Japan has the upper hand on the States as far as technology goes– as if whatever they’re using there will be shipped over here in a few years. Luckily, their best baseball talent is shipped over, and Seattle sort of has a history of getting the best Japanese players now. A nod to Ichiro.