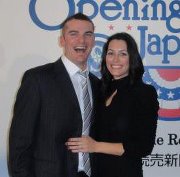 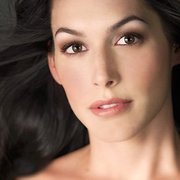 Brendan Ryan proposed to his girlfriend Sharyn Meichtry on the 90th floor of the Mori Tower in Japan. Before we tell you the rest of the story, allow us to brag a bit. As far as we can tell, as of 12:05 PM EST on March 20, 2012 – PlayerWives.com (through our famous Internet sleuthing) is the first site to have photos and the full name of Brendan Ryan’s girlfriend. I’m sure other sites are going to see our post and run with it like they figured it out, but come on guys – give us a little credit if you do. Anyway, back to the story.

After having through about proposing to Sharyn for quite some time, Brendan figured out that proposing while his Mariners were in Japan would be pretty cool. Then MLB found out about it and wanted to lend a helping hand. MLB arranged for the two to be taken on a tour of the Mori Tower, complete with fake tour guide. Once on the 90th floor, Brendan proposed to Sharyn. He even asked her the big question, “Will you marry me”, in Japanese – with some help from Ichiro’s translator. No way she could say no to that. Smooth operator.

In another cool aspect to the story, apparently Brendan didn’t trust himself with the ring – so he let Felix Hernandez keep it for him until he needed it. Pretty smart if you ask us, as Felix is the highest paid player on the team and, in Brendan’s words, “if anybody was going to lose it, he could afford it”. Smart kid.

Not much is known at this point about Sharyn, but we do know that she is from Los Angeles and she works at at CESD Talent Agency. More as we find it.