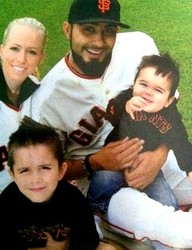 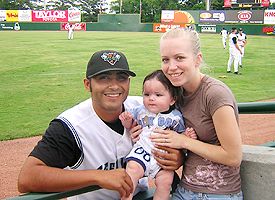 UPDATE 01/21/2015: We’re hearing rumors that Sergio Romo’s wife Chelsea Romo is now apparently his ex-wife. While we have no concrete proof, the Giants bullpen arm may be newly single. If these reports are true, it’s a sad day to see a long term relationship like this fall apart.

Best of luck to both Sergio and Chelsea no matter what the status is.

Sergio Romo’s wife Chelsea Romo has helped stabilize the insane on field journey of the Giants closer. Even prior to becoming the team’s lockdown closer, Sergio Romo has always been a solid arm out of the Giants bullpen. Sergio Romo’s path to the majors has been a standard journey fraught with stops in the minors and plenty of bus rides between AA stadiums. Stability off the field goes a long way.

Sergio Romo’s wife Chelsea Romo gave birth to the couples first child while she was still in college. Sergio was in the minors when Rilen Serge Romo was born on January 4, 2006. Their second son, Rex Ryder Romo was born Sept. 4, 2011. Sergio and Chelsea spent their early years of marriage apart while he toured the South on his low ball tour of duty, and Chelsea was in Arizona for school. In an interview with ESPN, she acknowledged the strain that put on a relationship:

This are definitely easier on the Romo clan now as San Fran looks to be a steady home for him for a while. After a couple seasons struggling to find an identity with the injury to, and subsequent free agent departure of Brian Wilson, the dude with the second sweetest beard in baseball (behind only the aforementioned Wilson), has become the man. He looks to keep nailing down end of games as the Giants chase their third world series in the past decade. 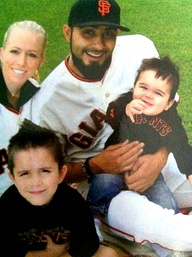