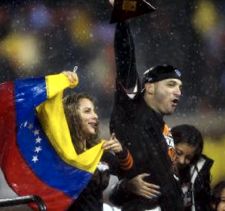 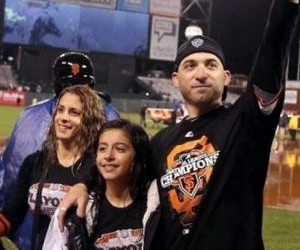 So, Marco Scutaro won the NLCS MVP? Red Sox and Rockies fans everywhere are shaking their heads. After two underwhelming seasons in Boston, he was not resigned and landed with the Rockies in 2012. They then subsequently traded him to San Francisco mid season in a move that certainly went under the radar. So it comes as a big surprise that Scutaro has performed so well with the Giants. Also a surprise? Marco Scutaro’s wife Marines Scutaro.

First, the name – Marines Scutaro. Quite unique indeed. She’s also rather unassuming, which may not be too surprising given Marco’s career. He’s been considered a serviceable player, but never stood out with any of the 6 teams he’s played for since being called to the majors in 2002.

Both Marco and Marines were born and raised in Venezuela. Scutaro takes pride in his home country, highlighted when he choose to play for the Venezuelan team during the 2006 World Baseball Classic (given his Italian heritage, he was eligible to play for that team as well). Scutaro also played on the Venezuelan team in 2009. He also considered Omar Vizquel his idol while growing up. Also showing her country pride, Marines was seen holding a large Venezuelan flag during the Giants on-field celebration after booking their trip to the World Series.

Marco and Marines have two daughters, Maria Veronica and Valerie. If the couple has a son, don’t expect him to follow in dad’s footsteps though – Marines was interviewed for the documentary that Scutaro stared in (“A Player to be Named Later”) and stated she would not want a son of hers to play baseball.