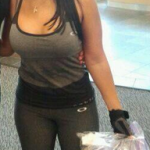 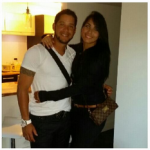 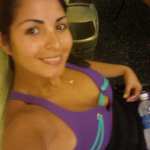 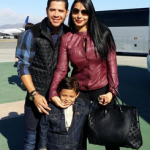 Gregor Blanco’s wife Mirna Blanco likes to hit the beach, and I like to see her hitting the beach. The lovely lady looks even lovelier when she’s at the beach in her two piece. She’s pretty funny too. I like her tweet regarding what sorts of text messages girls get: ‘You gotta text her goodnight if she’s special. The other bitches just get the “oh my bad I fell asleep” text in the morning.’ Classic, Mirna.

One of Gregor’s wife Mirna’s favorite activities is hitting the gym. I’m not sure who’s there taking pictures of her doing ab crunches while she’s there, but she’s got the pictures up on her Instagram to prove it, and she’s even made a special display that says “abs.” That was thoughtful. Though I don’t have full confirmation of this, I’m going to assume that Gregor met Mirna in Venezuela. The reason I think this is they’re both from there, and Gregor has gone back and forth to and from Venezuela many times over his career to play ball in the winter months. She’ll occasionally tweet something to show her support of her home country and various causes to help it. She’s also posted a cool picture of a whole gaggle of Major League players from various teams holding the Venezuelan flag. Represent.

Gregor and wife Mirna have a boy named Gregor Jr. and have been married a little over seven years. Gregor actually just gave Mirna a new Jeep Grand Cherokee for her birthday. I once received a cool Matchbox Grand Cherokee for my birthday, or maybe it was Wrangler. Anyway, it’s nice to be bankin’ some major league bucks. As you might imagine, the couple is very excited to be involved in the World Series, and Mirna will be rallying around big G as the series gets underway.