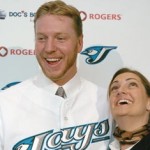 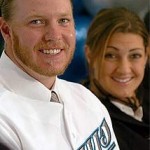 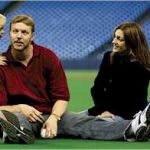 Roy Halladay’s wife Brandy Halladay lived in the same town as him growing up.  It made for a natural pairing, and their story goes way back. They initially met as children in Colorado, where both of their families lived. Brandy’s family eventually moved in high school and the two families lost touch.  But their paths crossed once again as when Brandy’s family moved back to Colorado in 1996.  Serendipity much? Sensing this was fate, Roy and Brandy took their relationship to the next level and married in November 1998.

Roy and Brandy were both raised in The Church of Jesus Christ of Latter-Day Saints.  AKA, they were Mormons. After you consider that, two years of dating before marriage actually might seem like an acceptable amount of time. Perhaps it was the realization that an undergarment won’t protect you from the devil, or maybe it was something else entirely, but the Halladay’s no longer practice as Mormons.

Roy Halladay’s wife Brandy gave birth to their two children, sons Ryan and Braden. Throughout his time in Toronto and Philadelphia, the family has been active with community charities.  They eventually started their own.  The Halladay Family Foundation.  This charity aims to benefit the many different initiatives they deem worthy of support.  To that extent, Roy donated six figures annually into his team’s charity foundations.  During his time in Toronto, Roy and Brandy helped to remodel his personal suite into “Doc’s Box”.  Doc’s box clearly named after Roy’s nickname.  The Rogers Centre suite was redesigned to be more child friendly for hosting families from a local children’s hospital.  The family continued their local support beyond Toronto as his playing career progressed.

But the charity doesn’t end with his local teams.  The Halladay’s spent time working with local food bank in Tampa Bay.  And no, Roy never played for the Rays.  But he certainly made his impact felt across that community.

The above post was written in 2009, prior to his passing in a tragic plane crash in 2017.  When Roy was inducted to the Hall of Fame in 2019, Brandy Halladay stood at the podium and delivered an emotional, and inspirational speech for her late husband. 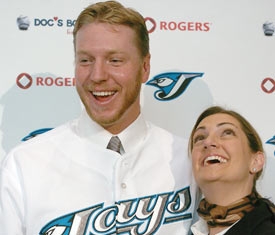