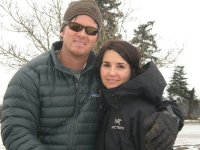 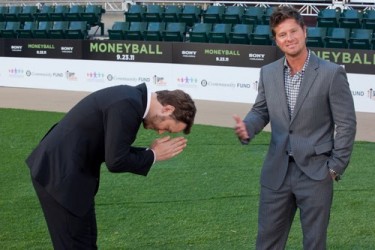 Recently immortalized in the film Moneyball by actor Chris Pratt, Scott Hatteberg has been a hot topic lately. Also featured in the film briefly, is Scott Hatteberg’s wife ‘Bitsy’ Hatteberg. After spending 11 years with the Red Sox, Scott Hatteberg found himself without a team and unable to make the throw from home plate, thanks to nerve damage in his elbows. As seen in Moneyball, the Oakland A’s and Billy Beane coming calling with a contract offer for Scott, with one caveat: he needs to move to first base, a position that he had never played before. Elizabeth Hatteberg helped her husband to learn the new position by hitting him ground balls off of a tee on a tennis court near their house. “I gave her a long, skinny bat and had her hit off a tee so I could work on my footwork”, Scott told reporters of the practice.

While Scott was with the Red Sox, Bitsy Hatteberg helped to organize the Red Sox wives’ cookbook, along with Stacey Beck, wife of former Red Sox pitcher Rod Beck.

After playing a few more seasons with the A’s and the Reds, Scott Hatteberg and his wife Bitsy now live in Gig Harbor, Washington with their three daughters, Lauren, Sophia, and Ella.