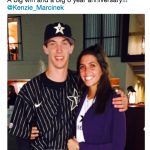 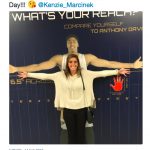 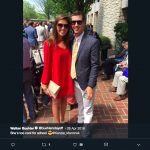 Depends what night your reader is reading this, dear poor context framing blogger.

Alright, alright.  Totally fair.  Let’s try again.  Waller Buehler’s girlfriend is probably stoked on October 1, 2018.  October 1 was the night that rookie Buehler pitched in game 163 for the Los Angeles Dodgers to clinch the NL West following yet another stellar outing.  If that’s not specific enough of a reason to be stoked, I sure don’t know what is.

Buehler and Marcinek have been together for more than six years now.  That puts them together right around high school.  For them to survive separate colleges, the minors and now Los Angeles?  Impressive.  While Walker went to Vanderbilt, McKenzie went to the University of Kentucky.  She was a proud member the Zeta Delta sorority during her time there.

Walker Buehler is not afraid to show off his girlfriend.

And, look, why would he be?

Walker Buehler’s girlfriend is well represented on his social media.  His Twitter account has plenty of loving messages to McKenzie, and pictures of the two.  His Instagram has less, but certainly represents her well. McKenzie took in Walker’s incredible game 163 to clinch the NL West for the Dodgers, and took to Instagram stories to share the day. In late September, McKenzie brought her nephew and God-son to Dodger stadium, and took pics with Buehler from the field level.

In June, Buehler and Marcinek attended the Dodgers Blue Diamond Gala.  The Gala was a fundraiser for the Los Angeles Dodgers Foundation, and was the fourth iteration of the event.  A John Legend performance capped off the night  hosted by Arsenio Hall and George Lopez.  Walker and McKenzie got fully decked out to walk the red carpet together which has to be surreal for hometown kids from Kentucky to be featured on the red carpet for a Los Angeles based gala.  Is that more surreal than Walker winning game 163?  Hell of a question, and hell of a decision.  But, one that only Walker Buehler and McKenzie Marcinek can answer!